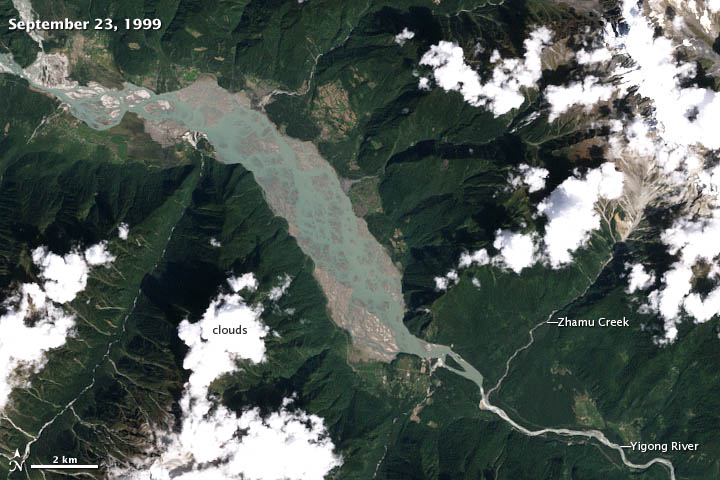 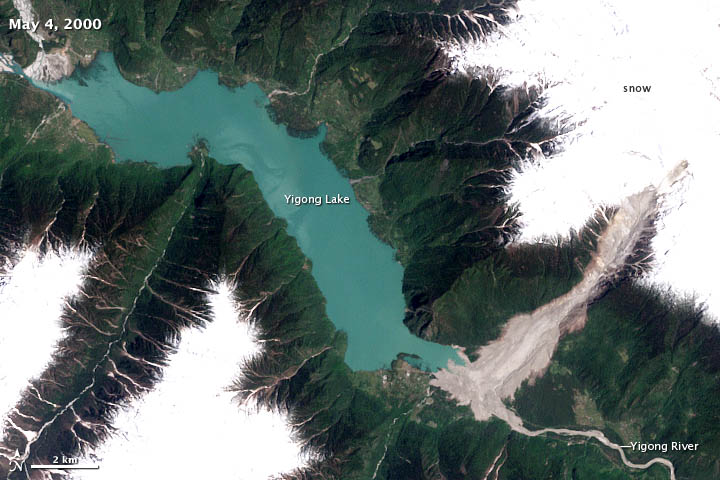 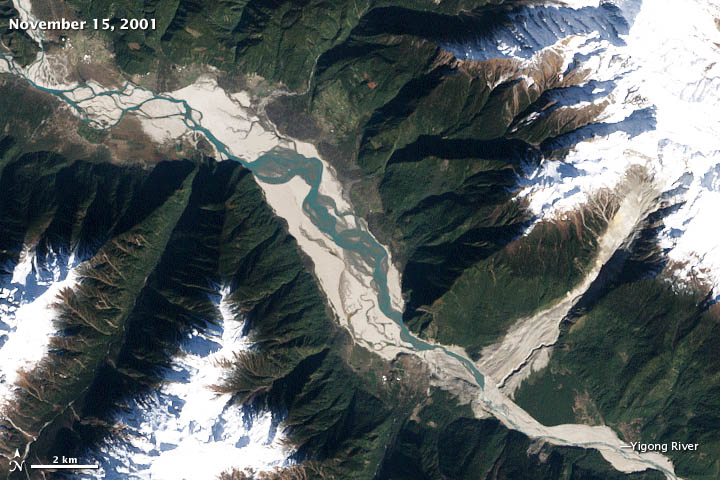 One of the world’s largest recorded landslides occurred on April 9, 2000, when more than 100 million cubic meters (3.5 billion cubic feet) of loose rock, ice, and other debris tumbled down a steep, narrow gorge in eastern Tibet.

Within ten minutes, the slurry of debris—which included granite and marble boulders, snow, and sediment—moved nearly 10 kilometers (6 miles) and dropped from an elevation of 5,520 meters (18,110 feet) to the valley floor at 2,190 meters above sea level. The debris, lubricated by rainfall and meltwater from glaciers on the surrounding mountains, slid at velocities up to 14 meters per second (31 miles per hour) through a gully carved by Zhamu Creek.

By the time the mass of material stopped, it had buried the Yigong River, creating a debris dam that blocked the flow. The dam occupied 2.5 square kilometers (1 square mile) and was 90 meters (295 feet) high at its tallest edge. River water began to back up immediately, creating a large lake behind the dam. As time passed, increasing volumes of water began to seep through the bottom of the dam, muddying the river water downstream.

The area and volume of the lake continued to grow, and as it did, authorities evacuated thousands of people from villages downriver. They started digging a channel through the debris in the hopes of slowly draining the lake. The channel was finished by June 3, 2000, but it wasn’t enough to stop the dam from collapsing catastrophically on June 11. The collapse sent a massive surge of water down the Yigong that swelled it up to five times its normal width. Floodwaters in the wake of the collapse destroyed five bridges, sections of a highway, and communications cables along the banks. The flooding proved most destructive downriver in India, where it destroyed the homes of 500,000 people.

The Enhanced Thematic Mapper Plus (ETM+) on the Landsat 7 satellite captured the three images above, which show how the landscape looked five months before the landslide (top), nearly a month after (middle), and five months after the dam collapsed (bottom). The lake was about 34 square kilometers (13 square miles) when Landsat 7 acquired the September 23 image. In June 2000, prior to the dam collapse, the lake covered 52 square kilometers and had flooded several villages and a tea plantation.

This wasn’t the first time that Zhamu Creek’s produced a large landslide. In 1900, another slide tore through the same gully and created a dam that breached after a month. The landslide that occurred in 2000 was the 11th largest on record, according to a list maintained by the United States Geological Survey.

A landslide in eastern Tibet backed up the Yigong River for two months.