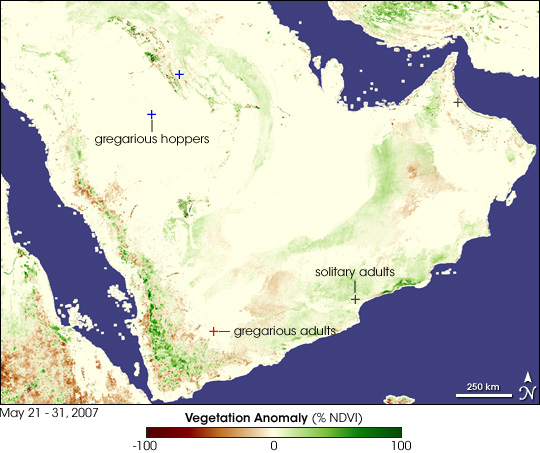 Rain falling on the arid soil of the Arabian Peninsula brings a brush of green to the landscape. It also provides the key ingredient in initiating an outbreak of desert locusts. Water signals to locust eggs buried in the sand that it is time to hatch, and the new vegetation provides a source of food for the emerging locusts. As a result, one of the easiest ways to track emerging locust populations is to look for new vegetation in the desert. This satellite image does just that: it is a vegetation index image that reveals the state of vegetation on the Arabian Peninsula. Areas in which plants are more abundant or growing more quickly than average are green, while regions of poorer-than-average plant growth are brown. It is in the green areas, where food and water are abundant, that locust swarms are likely to develop.

The data used to create this image were collected between May 21 and May 31, 2007, by the SPOT vegetation satellite. Vegetation on the Arabian Peninsula (where it exists) is mostly average, as indicated by the neutral off-white tone, but streaks of green accentuate the image. Superimposed on the image are the locations where locusts were observed, as reported by the United Nations Food and Agriculture Organization’s Locust Watch on June 6, 2007. The most serious outbreak is in Yemen, where a thick swarm of adult locusts (gregarious adults) congregated in a remote, normally arid region. Swarms of juvenile hoppers (gregarious hoppers) have also been spotted in Yemen near the Saudi border, as well as in Saudi Arabia’s interior. Solitary adults have a wider range.

The desert locust is normally a solitary insect, but when water is plentiful, a large number of eggs hatch. The high population density forces the locusts to become more social, and they form a swarm. Because the desert locust can eat roughly its own weight in vegetation every day, large adult swarms consume nearly all vegetation in a region, and then migrate to another food source. Locust swarms decimate crops, and as a result, the Food and Agriculture Organization (FAO) advises countries in which an outbreak is occurring to take measures, such as aerial spraying, to prevent swarms from developing or migrating. In addition to the outbreak in Yemen, which is the worst since 1993, and Saudi Arabia, locust experts from the FAO warn that heavy rains from Cyclone Gonu may provide enough water and vegetation for swarms to develop or migrate into Oman and Iran.