In the City, Bright is the New Black 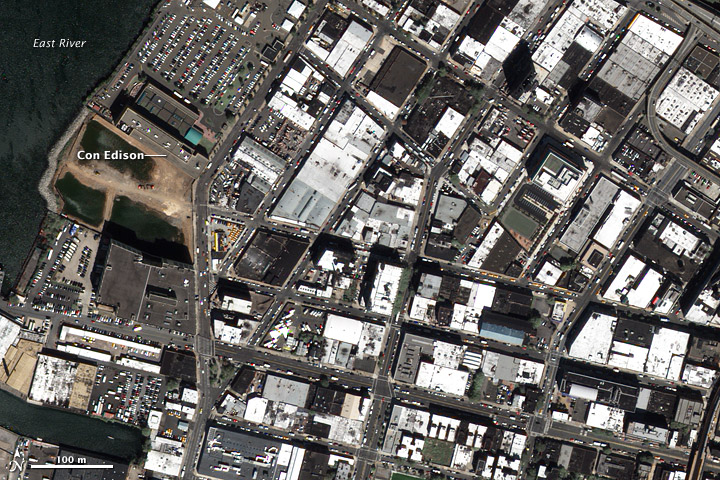 When we think about the hottest places on Earth, we tend to look to deserts. And in fact, research shows that the highest land-surface temperatures recorded on the planet are almost always in places that are dry, rocky, bare, and dark-colored. It turns out that such conditions appear in cities as well as deserts, which is why researchers are thinking about how to change the face of urban areas...or at least the rooftops.

The natural-color image above from DigitalGlobe’s Worldview-2 satellite shows a section of Queens, New York, on September 15, 2010. Viewed from space, the city is a patchwork of dark (often black) surfaces, along with white and other colored rooftops. The plot below the image, based on data from researchers at Columbia University and the NASA Goddard Institute for Space Studies, shows the surface or “skin” temperature of different-colored rooftops in early August 2010.

“I see surface temperatures in the city that routinely exceed what you might find in the desert,” says Stuart Gaffin, who studies the urban heat island effect, the propensity of cities to trap heat and grow considerably warmer than the surrounding natural environment. Heat islands are caused by the construction of dark surfaces—like asphalt pavement and tar-paper roofs—and the removal of vegetation—which cools the land with both shade and moisture. According to the U.S. Environmental Protection Agency, urban areas regularly record air temperatures as much as 6° Celsius (10° Fahrenheit) hotter than the surrounding suburban and rural areas.

Using portable infrared radiometers, Gaffin and colleagues have been measuring land-skin temperatures (LSTs) in greater New York City, including at the Con Edison (power company) buildings shown above. They have observed temperatures as high as 77 to 82°C (170 to 180°F) on the black rooftops of the city in mid-summer. Those hot roofs amplify the oppressiveness of summer by radiating extra heat both by day and at night. Even in winter, rooftop temperatures can be tens of degrees warmer than local air temperatures.

Gaffin and others are interested in how rooftops and other flat, impervious surfaces can concentrate heat, and in how they can be made to reflect more. They have been working for nearly a decade to find creative solutions to reduce heat island effects in cities, such as resurfacing rooftops with white paint or with low-maintenance, lightweight vegetation.

In a recent study, Gaffin and colleagues compared the surface temperature of black, white, and “green” (vegetated) roofs and found that black roofs can be up to 30°C (54°F) hotter than a green or white roof. Installing a plant-covered roof is the ultimate technique to combat urban heat because it adds a combination of slight shading and a lot of cooling moisture.

But the researchers found that even a simple step like painting black roofs white—increasing the albedo, or reflection of light—can reduce temperatures dramatically. In a program partly sponsored by the New York City government, white synthetic surfaces and paints were found to reduce peak rooftop temperatures by 24°C (43°F) compared to typical black rooftops.

“Cities have been progressively darkening the landscape for hundreds of years,” said Gaffin. “City roofs are traditionally black because asphalt and tar are waterproof, tough, ductile and were easiest to apply to complex rooftop geometries. But from a climate and urban heat island standpoint, it makes a lot of sense to install bright, white roofs. That's why we say, ‘Bright is the new black.’”

To learn more about how scientists measure surface temperatures from space and the ground, read the new Earth Observatory feature, Where is the Hottest Place on Earth?. To learn more about the green and white roof studies, read Bright is the New Black: New York Roofs Go Cool.

Surface temperatures in the city can rival the desert. White or "green" rooftops can change that.

Civic officials from Rio and scientists from NASA are talking about ways the city can combat rising urban temperatures.