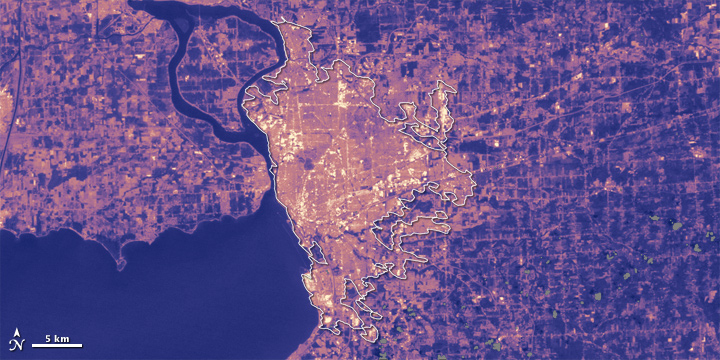 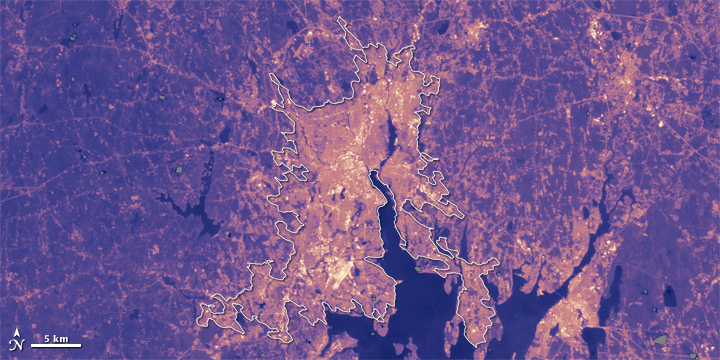 By evaporating water, plants cool their surroundings. By replacing plants with impervious surfaces, cities trap heat, and create a phenomenon known as the urban heat island. A variety of factors affect the urban heat island. Bigger cities tend to have stronger heat-trapping capacities than smaller cites. Cities surrounded by forest have more pronounced heat islands than do cities in arid environments. A new study, presented at the 2010 Fall Meeting of the American Geophysical Union, found that a city’s layout—whether sprawling or compact—can also affect the potency of its urban heat island.

Providence and Buffalo are roughly the same size, and both fall within the study area chosen by the research team: the forested environments in the northeastern United States. By choosing cities that are similar in size, and situated in similar environments, researchers can better compare city development patterns and their corresponding urban heat islands.

Although the cities’ development patterns differ, the nature of their surroundings also plays a role. Dense forest surrounds Providence while a mix of forest and farmland surrounds Buffalo. The urban heat island effect is more pronounced when forest rings a city.

Urban heat island research has significant implications for human health. In the middle of an already hot summer, the urban heat island effect can be deadly, especially at night. Round-the-clock heat means that city residents have no respite, and those who manage to sleep through the night may not drink enough water to stay hydrated. Although air conditioning provides relief, not everyone has access to it, especially poorer neighborhoods and developing nations. Where available, some kinds of air conditioning can raise outside temperatures. 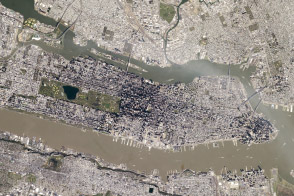