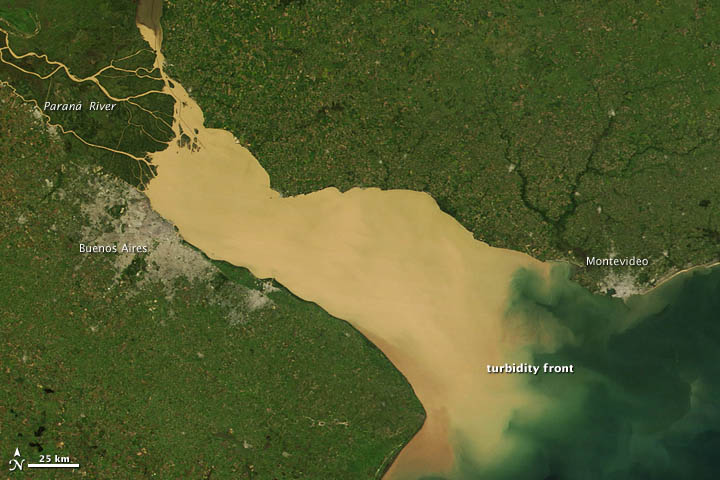 On March 31, 2012, the Moderate Resolution Imaging Spectroradiometer (MODIS) on the Terra satellite captured this view of muddy water from the Paranà River flowing into the Río de La Plata, a funnel-shaped estuary on the eastern coast of South America with a drainage area that covers about 20 percent of the continent.

The ParanÃ¡ River, the second longest river in South America after the Amazon, supplies three-quarters of the fresh water that enters the estuary, with the remainder arriving from the Uruguay River. Topsoil running off agricultural fields upstream and flowing into the Paranà as a result of rainstorms likely produced the heavy load of brown sediment visible in the river water.

The image offers a glimpse of the complicated mixing processes that occur at the interface of the muddy fresh water from the Paranà and the ocean water of the South Atlantic in an area known as a turbidity front. The location of the turbidity front varies over the course of the year. It tends to be in its westernmost position during the summer when river discharge is at a minimum and the predominant winds are from the northeast, while it reaches its easternmost position in the spring when strong winds from the southwest are present.

Muddy river outflow meets the South Atlantic at an estuary in South America.

Rio de la Plata is the muddy estuary of the Paraná and Uruguay Rivers, and forms part of the border between Argentina and Uruguay. The rich estuary supports both capital cities of Buenos Aires and Montevideo. This image provides a snapshot of the complicated mixing in the Rio de la Plata between the fresh river waters and the water of the South Atlantic.