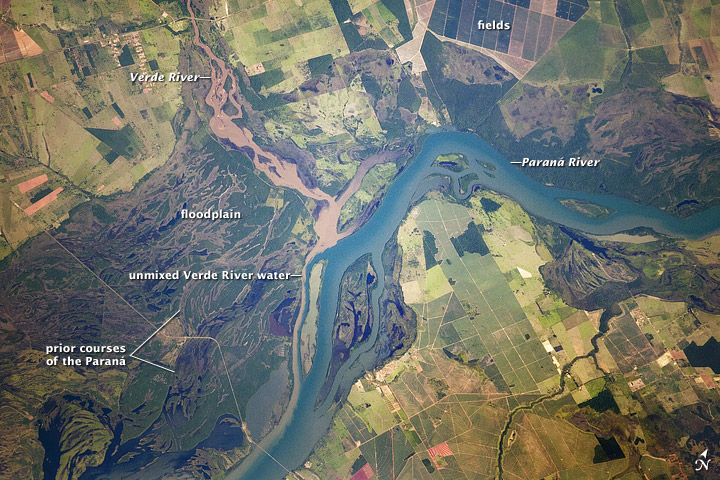 The Paraná River appears as a wide, blue strip with the muddy brown water of the smaller Verde River entering from the northwest (top left). An extensive wetland (dark green) occupies most of the left half of this astronaut photograph, and the floodplain reaches a width of 11 kilometers (about 7 miles). The thin line of a road crossing the floodplain also gives a sense of scale. Above the Paraná-Verde confluence (image center), the floodplain is much narrower.

The floodplain is generated by sediments delivered by both rivers. The evidence for this is that the entire surface is crisscrossed by the wider traces of former Paraná River channels, as well as numerous narrower traces of the Verde. The floodplains along both rivers are bordered by numerous rectangular agricultural fields. The dominant crops along this part of the Paraná River are coffee, corn, and cotton.

Turbid water, such as that in the Verde River, is common in most rivers that drain plowed agricultural land, as some topsoil is washed into local rivers after rains. A long tendril of brown water extends from the Verde into the main channel of the Paraná, where it hugs the west bank and remains unmixed for many kilometers. This effectively shows the direction of river flow from orbit: right to left for the Paraná, and upper left to image center for the Verde.

Astronaut photograph ISS030-E-90012 was acquired on February 5, 2012, with a Nikon D2Xs digital camera using a 400 mm lens, and is provided by the ISS Crew Earth Observations experiment and Image Science & Analysis Laboratory, Johnson Space Center. The image was taken by the Expedition 30 crew. The image has been cropped and enhanced to improve contrast, and lens artifacts have been removed. The International Space Station Program supports the laboratory as part of the ISS National Lab to help astronauts take pictures of Earth that will be of the greatest value to scientists and the public, and to make those images freely available on the Internet. Additional images taken by astronauts and cosmonauts can be viewed at the NASA/JSC Gateway to Astronaut Photography of Earth. Caption by M. Justin Wilkinson, Jacobs/ESCG at NASA-JSC.