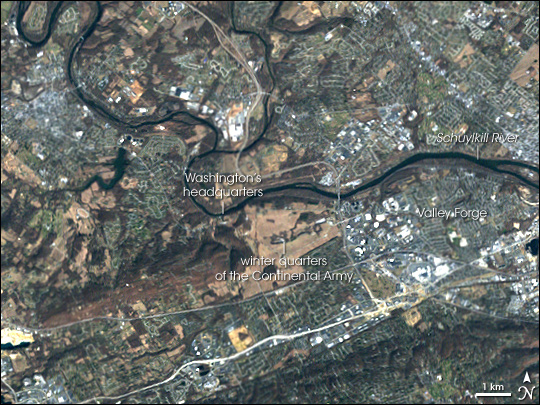 No battles were fought at Valley Forge, but America’s Revolutionary War posed other hardships besides combat, namely cold, hunger, and disease. During the winter of 1777-1778, some 2,000 soldiers died in nearby hospitals after the Continental Army sought refuge here, roughly 29 kilometers (18 miles) northwest of Philadelphia. Despite the hardships of its six-month stay, however, the army undertook daily drills to transform itself into a disciplined fighting force, and supplies and new troops gradually trickled in. By springtime, a more capable Continental Army emerged.

Today, Valley Forge is a national historical park near the junction of the Pottstown Expressway and the Pennsylvania Turnpike. On February 19, 2002, the Enhanced Thematic Mapper Plus sensor aboard the Landsat 7 satellite took this picture of Valley Forge and its surroundings, including the location of George Washtington’s headquarters and the Continental Army’s winter campsite. Also pictured is the Schuylkill River to the north.

Today’s landscape bears little resemblance to what the Continental Army saw. A modern metropolis surrounds the old winter quarters, with gray pavement from highways and side streets carving through the vegetation. Inside this bustling city, Valley Forge National Historical Park offers visitors open space and outdoor activities such as nature walks, fishing, and cross-country skiing. In this wintertime picture, the grassy area around the winter headquarters is brown, but little snow cover appears in this image; the white patches in this image are the tops of buildings. To the east of the old campsite is an urban area now named Valley Forge in honor of the original soldiers.

You can download a 28.5-meter-resolution KMZ file of Valley Forge for use with Google Earth.

No battles were fought here, but it was still one of the most important landmarks of the American Revolution.