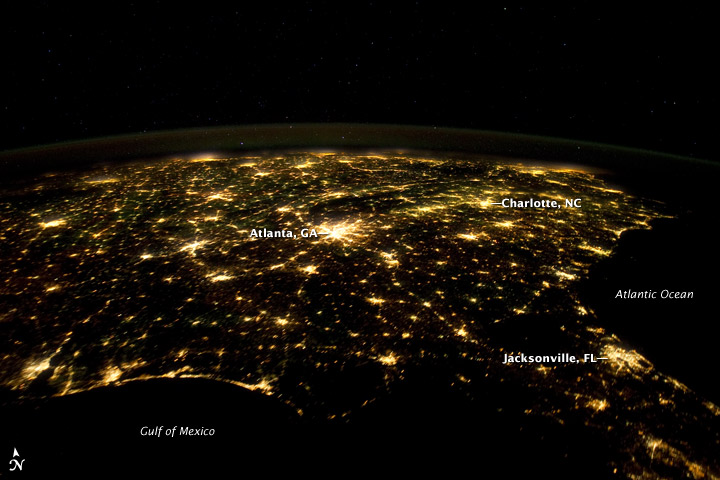 This astronaut photograph from the International Space Station highlights the southeastern part of the South at night, including the eastern Gulf of Mexico and lower Atlantic Seaboard states. The view is part of a time-lapse series of images that extends from just southwest of Mexico to northeast of Newfoundland, Canada. New sequences from the Space Station are regularly posted on the Crew Earth Observation videos page.

Following the American Civil War (1861-1865), the southern U.S. continued to be mostly agrarian until the latter half of the 20th century, when increased migration from other areas of the country and immigration from outside the U.S. led to increased urbanization. The brightly lit metropolitan areas of Atlanta, Georgia (image center) and Jacksonville, Florida (image lower right) appear largest in the image, with numerous other urban areas forming an interconnected network of light across the region.

A large dark region to the northwest of Jacksonville is the Okefenokee National Wildlife Refuge. Likewise, the ridges of the Appalachian Mountains form dark swaths to the north of Atlanta and west of Charlotte, North Carolina (image center). The faint gold and green line of airglow—caused by ultraviolet radiation exciting the gas molecules in the upper atmosphere—parallels the horizon (or Earth limb).

Astronaut photograph ISS030-E-55569 was acquired on January 29, 2012, with a Nikon D3S digital camera using a 24 mm lens, and is provided by the ISS Crew Earth Observations experiment and Image Science & Analysis Laboratory, Johnson Space Center. The image was taken by the Expedition 30 crew. The image has been cropped and enhanced to improve contrast, and lens artifacts have been removed. The International Space Station Program supports the laboratory as part of the ISS National Lab to help astronauts take pictures of Earth that will be of the greatest value to scientists and the public, and to make those images freely available on the Internet. Additional images taken by astronauts and cosmonauts can be viewed at the NASA/JSC Gateway to Astronaut Photography of Earth. Caption by William L. Stefanov, Jacobs Technology/ESCG at NASA-JSC.

Atlanta, Jacksonville, and Charlotte fill the darkness with light. 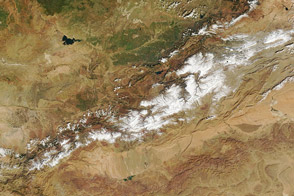