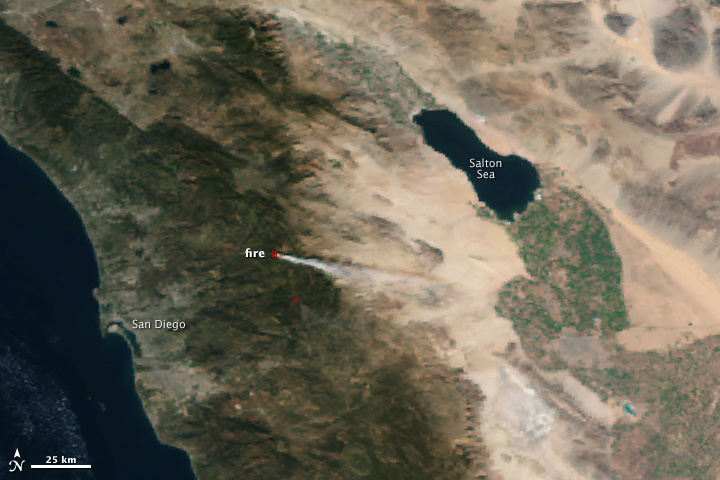 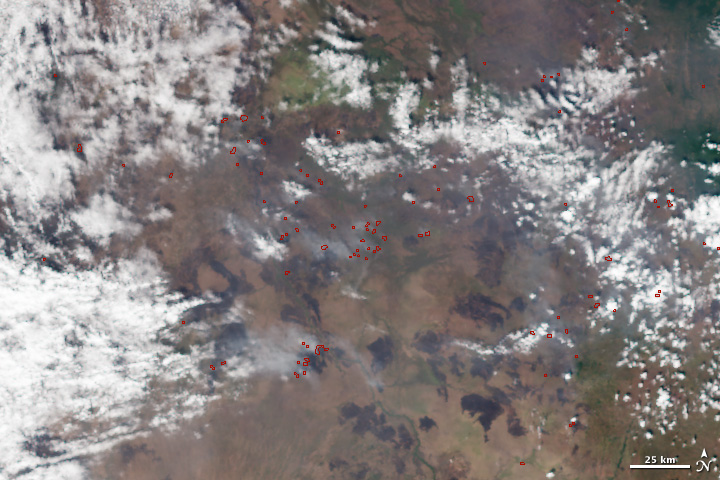 Like a baby learning to walk, the Visible Infrared Imager Radiometer Suite (VIIRS) is slowly adjusting to its new space environment and is gradually taking steps toward full operations.

VIIRS was launched on October 28, 2011, on the National Polar-orbiting Operational Environmental Satellite System Preparatory Project (NPP) satellite and produced its first image on November 21. By January 19, 2012, the sensor acquired its first measurements of fires. These measurements and others from VIIRS are still preliminary, and scientists and engineers will continue testing and calibrating the measurements over the coming weeks before data are released for public use.

It took longer to acquire the first VIIRS fire measurements because the sensor had to cool enough to accurately observe thermal infrared energy. These images show a few of the fires detected on January 19. The top image shows a smoky fire burning in the mountains east of San Diego, California. The lower image shows widespread agricultural burning in South Sudan, East Africa. In both cases the fires are marked in red.

The images indicate that the VIIRS sensor is in good health and that it appears to be detecting fires accurately. In both images, the fire detections line up with plumes of smoke. In the South Sudan image, the fires are burning in areas where black, charred ground points to recent fire activity. Flying over the same areas at about the same time, the Moderate Resolution Imaging Spectroradiometer (MODIS) on NASA’s Aqua satellite also detected fires in both California and South Sudan.

It is vital that VIIRS makes these measurements because vegetation fires are one of the most important elements of land cover change and nutrient recycling in the Earth system. Fires play a major role in the formation and maintenance of numerous ecosystems. Over the last millennia, naturally occurring fires were gradually offset by those set by humans for hunting, land clearing and maintenance, and fuel production (charcoal), as seen in the East Africa image.

With the beginning of daily polar orbiting satellite data—which started in the early 1980s—and the routine monitoring of fire activity, it soon became clear that humans were quickly changing the natural fire regimes of large areas of the world. The fires have cascading effects on atmospheric composition (due to smoke) and alteration of climate conditions. Due to the widespread occurrence of fires, Earth satellites have become the primary resource for the monitoring of biomass burning and for timely information for fire managers and the science community.

NOTE: On January 25, the NPP satellite was renamed the Suomi National Polar-orbiting Partnership, in honor of Verner E. Suomi, “the father of satellite meteorology.” 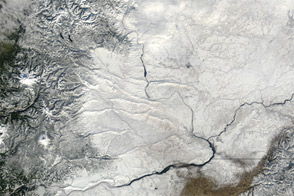