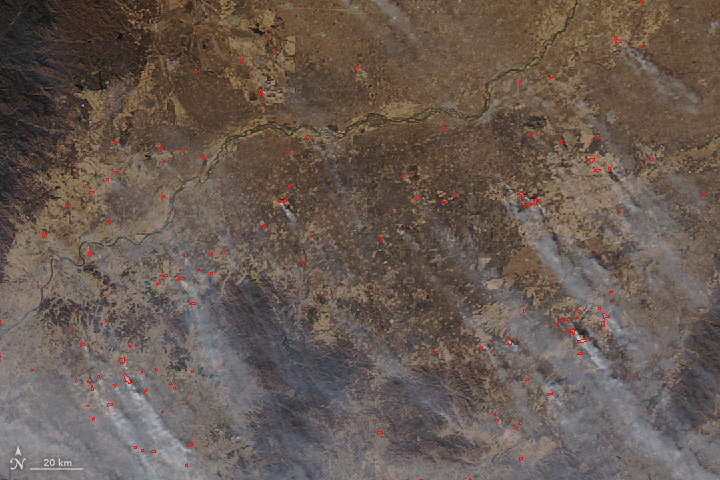 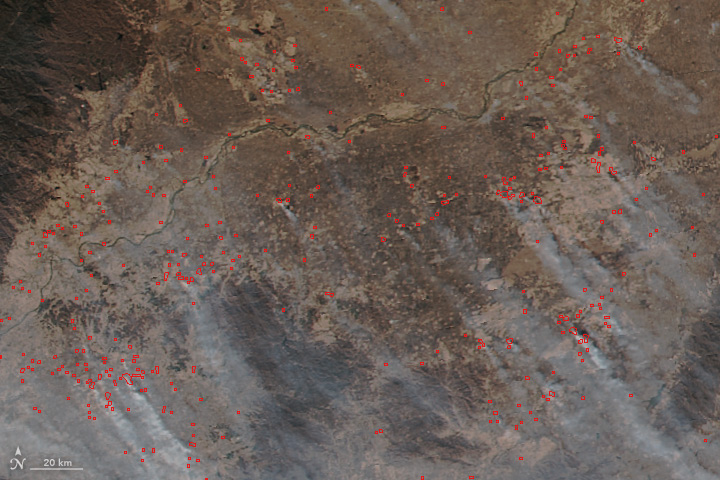 The images above illustrate the difference in the fire detection capabilities of the sensors. Both images show agricultural fires burning in northeast China around the same time on November 6, 2015. MODIS captured the upper image while the lower image was acquired by VIIRS. Turn on the image comparison tool to see the differences. Though VIIRS has more detailed fire observations, the background of the MODIS image seems crisper. This is because MODIS has better resolution than VIIRS when looking at land surfaces that are not on fire. (250 meters per pixel for MODIS versus 375 meters per pixel for VIIRS).

The improved resolution of the VIIRS fire observations means scientists—as well as firefighters—have a more capable tool for monitoring fire activity. As explained in the video below, the improved resolution means experts should be able to use data collected by VIIRS to more accurately model and predict shifts in a fire’s direction or behavior.

“We hope that by infusing the higher-resolution fire detection data and fire behavior modeling outputs into tactical fire situations, we can lessen the pressure on those working in wildfire management,” said Wilfrid Schroeder, a scientist at the University of Maryland and the principal investigator for the VIIRS active fire data product.

There are many other applications of the VIIRS fire data. Climatologists will be able to use it to better estimate the volume of greenhouse gases released into the atmosphere by fires. Air quality experts will have a new tool for estimating the public health consequences of smoke exposure. In countries that ban or limit fires during certain seasons, government and law enforcement officials will have more accurate information for identifying where prohibited fires started burning.