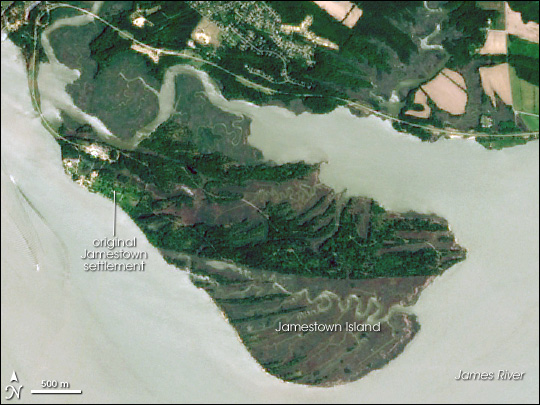 On May 14, 1607, a group of London-based entrepreneurs and accompanying laborers, collectively known as the Virginia Company, made landfall at Jamestown, Virginia, establishing the first permanent English settlement in what is now the United States. In May 2007, the United States celebrated Jamestown’s 400th Anniversary, commemorating the experiences of the European settlers, Native Americans, and Africans whose lives and cultures intersected in the earliest years of the American colonies.

NASA joined the celebration to honor the spirit of exploration that runs as a common thread throughout human history. In honor of the anniversary, the Advanced Land Imager (ALI) on NASA’s Earth Observing-1 satellite took this picture of Jamestown Island, including the location of the original settlement and the nearby James River, on May 1, 2007.

In this image, the water of the James River appears pale green, perhaps from a combination of sunlight reflected off the surface and sediment in the water. On land, colors range from buff to brown to deep green, depending on the amount of vegetation. A meandering pattern of residential streets appears near the top of the image—a clear sign of how technology has changed the landscape since the original settlement.

One of the most striking features of this image is a distinct line running across the southern portion of Jamestown Island, separating forest in the north from low-lying vegetation in the south. South of the line, several dark green fingers of forest reach inland from the western shore. The College of William and Mary describes Virginia’s coastal plain as a “terraced landscape that stair-steps down to the coast and to the major rivers.” The thick forest in the north sits on land at a higher elevation, and the stands of trees along the southwestern shore likely also rest on ridges of higher land separated by river bottoms and developing bays.

Careful studies have enabled historians and scientists to piece together what kind of environment greeted the Virginia Company in 1607. When the first settlers arrived, what is now Jamestown Island was a peninsula, and sea level was about 1 meter (3 feet) lower than today. Erosion resulting from rising sea level carved the island away from the mainland about two centuries later. By early seventeenth century, however, brackish (salty) water had already invaded the James River, making freshwater scarce.

Life was hard for the first settlers at Jamestown. Historians’ opinions differ about the ability of the original settlers to conquer the wilderness. Some scholars suggest that the gentlemen in the Virginia Company would have disdained hard work, others arguing that everyone worked hard to help the colony survive. Nevertheless, in the winter of 1609-1610, nearly 90 percent of the settlers died in a period called “the starving time.” Assorted culprits have been offered to explain the die-off, but one factor was probably environmental. A 1998 tree-ring study indicated that, during that time, the region suffered the worst drought in almost eight centuries.

On May 14, 1607, a group of London-based entrepreneurs and laborers made landfall at Jamestown, Virginia, establishing the first permanent English settlement in what is now the United States. 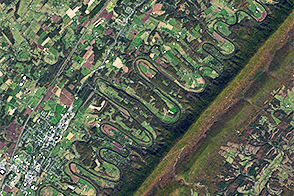