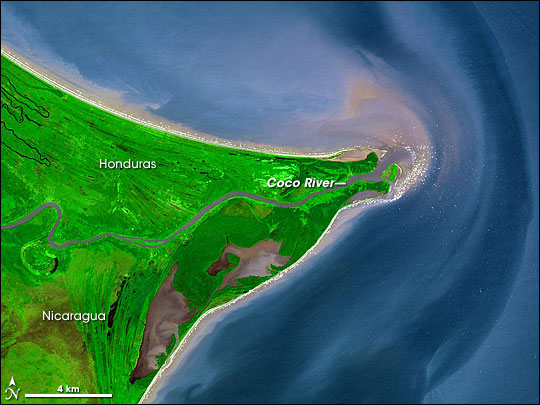 Around 15 degrees North, a rounded point of land juts out into the Caribbean Sea from the Central American isthmus. This low-lying, wet area is called the Mosquito Coast, a corruption of the tribal name of some of the area’s native people, the Miskito. The area includes parts of Honduras (north) and Nicaragua (south). Between the two countries flows the Coco River, which empties into the Caribbean at Cape Gracias á Dios.

This image of the Coco River and the Mosquito Coast is from the Advanced Spaceborne Thermal Emission and Reflection Radiometer (ASTER) on NASA ’s Terra satellite. In it, vegetation is shades of green, water is shades of blue and purple, and the beaches are very light tan. The variety of shades of blue and purple of the water may be due to water clarity and/or the calmness of the water, with clear, calm water in inland lakes and ponds appearing deep blue, and turbid or rough waters appearing more grayish and purple.

The streaked appearance of the land in places to the north and south of the river is from relic shorelines. South of the river near the center-left edge of the scene, a meander (deep bend) in the river has been cut off from the main channel over time and is filling with vegetation. It appears as a bright green semicircle.