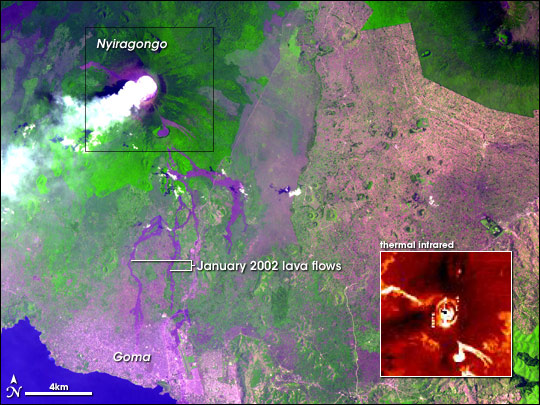 Death by volcanism is not unusual. During the 20th century, volcanic eruptions have killed more than 75,000 people. Lava flows—thick and slow-moving compared to pyroclastic flows of hot ash, gas, and rock fragments—rarely cause a loss of life: 226 lives were lost last century. When the African volcano Nyiragongo erupted unusually fluid lava in January 2002, however, nearly 500,000 Congo citizens were displaced, and dozens were killed. The lava did not erupt from the central crater, but instead ran from fissures along the southern slopes, just north of the city of Goma.

This image of Nyiragongo Volcano was captured by the Advanced Spaceborne Thermal Emission and Reflection Radiometer (ASTER) on NASA’s Terra satellite on February 21, 2005. Vegetation appears green; lava rock is dark purple; bare ground, probably agricultural land, is pink; water is blue; and the urban area of Goma is light purple. A lava lake churns within the volcano’s crater, and on the day of this image, a cloud of steam (and perhaps other gases) billowed from the summit.

Since January 2002, satellites have monitored episodes of volcanic activity at Nyiragongo. ASTER can detect thermal (heat) energy in addition to visible light, which allows scientists to measure lava lake temperatures as well as to create digital images. The plume that ASTER observed at the crater of Nyiragongo was a visible sign of volcanic venting. Invisible to the human eye, however, was infrared energy (inset image) that allows volcanologists to measure the temperature of rocks heated by molten lava in the crater. In the inset, cooler areas are dark, and hotter areas are whitish-yellow.

The 2002 eruption was not the first fluid eruption to affect Goma’s citizens. In 1977, Nyiragongo erupted fast-moving lava that flooded twenty square kilometers in about one hour. The lava traveled at a remarkable speed of sixty kilometers per hour (about 37 miles per hour), and it cost an estimated 180 people their lives. Most lavas are thick and move slowly enough to allow humans to escape from oncoming flows. Nyiragongo lavas are different because they are unusually low in silica, the strong silicon-oxygen bonds that typically make lavas sluggish and thick. Those fast-flowing lavas were responsible for nearly 90 percent of the lava-related deaths during the 20th century.

When the African volcano Nyiragongo erupted unusually fluid lava in January 2002, nearly 500,000 Congo citizens were displaced, and dozens were killed. The lava did not erupt from the central crater, but instead ran from fissures along the southern slopes, just north of the city of Goma.