Rain in the U.S. Midwest 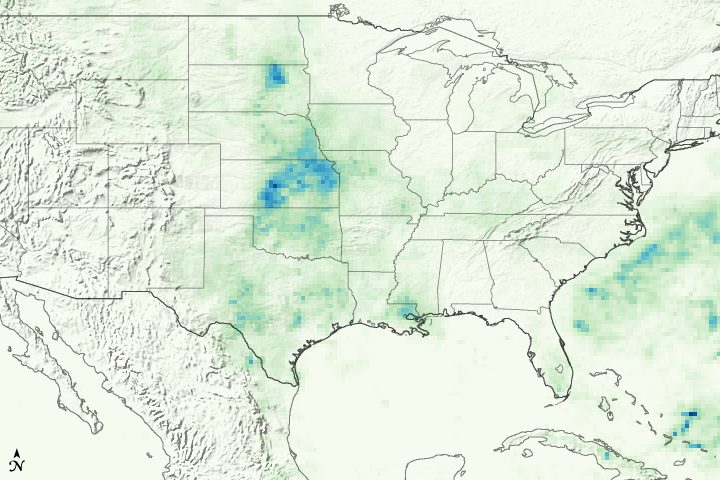 The powerful storms that moved across the U.S. Midwest during the first week of May 2007 brought wind, hail, tornadoes, and drenching rain. This image shows rainfall totals over parts of Oklahoma, Kansas, and Nebraska between May 1 and May 8, based in part on measurements made by the Tropical Rainfall Measuring Mission (TRMM) satellite.

More than 400 millimeters (15.7 inches) of rain fell over some regions, corresponding with locations where the National Weather Service reported severe weather. A wide swath of heavy rain arcs in a clockwise direction from western Oklahoma, through central Kansas, and into southeastern Nebraska. Torrential rain also fell over southeastern Louisiana, pounding visitors to the annual New Orleans Jazz Festival. South-central Texas’ Edward Plateau was soaked with more than 240 millimeters of rain during the period, as well.

From May 4 to May 8, the National Weather Service received approximately 683 reports of severe weather, 140 of which were reports of tornadoes, including the massive F5 tornado that devastated the city of Greensburg, Kansas. Beyond the damaging winds and tornadoes, the torrential rain triggered extensive flooding throughout the Central Plains. On the evening of May 7, flood warnings were in effect from South Dakota to southern Texas, and by May 8, the Hydrologic Information Center reported moderate to major flooding at 53 stream gauge sites in South Dakota, Iowa, Kansas, Nebraska, Missouri, and Arkansas. The floods could be as severe as the 1993 flood, one of the costliest floods in U.S. history, reported the Associated Press.

The powerful storms that moved across the U.S. Midwest during the first week of May 2007 brought wind, hail, tornadoes, and drenching rain. More than 400 millimeters of rain fell over some regions.