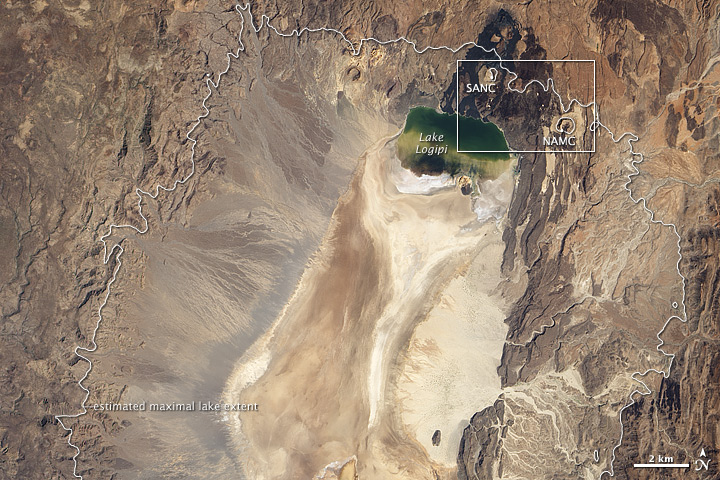 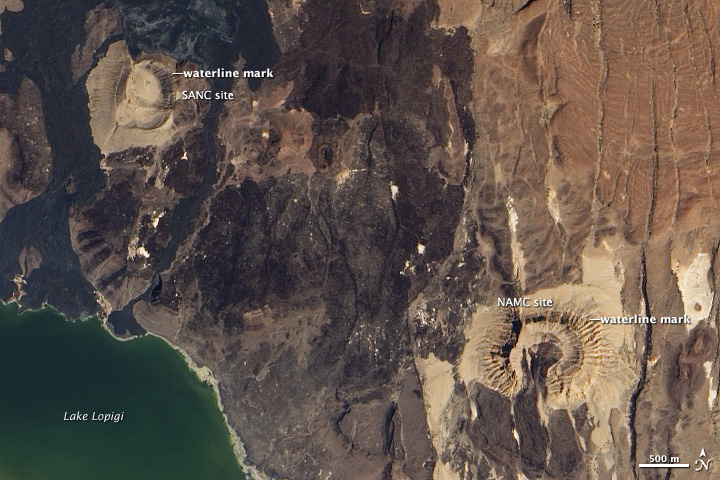 The Suguta Valley is one of the driest places in Kenya, and may be one of the driest places near Earth's Equator. The remote location limits field studies, but data indicate that annual precipitation is less than 300 millimeters (12 inches) a year, while evaporation ranges from 3,000 to 4,000 millimeters (120 to 160 inches). And yet, as recently as 8,000 years ago, this arid valley was a vast lake.

On January 10, 2011, the Advanced Land Imager (ALI) on NASA’s Earth Observing-1 (EO-1) satellite captured this natural-color image of the north end of the Suguta Valley, including Logipi Lake, which seasonally fills just a small portion of the valley. Derived from Shuttle Radar Topography Mission (SRTM) data, the white line around the valley in the top image approximates the Lake Suguta shoreline when water levels were at their highest.

The Suguta Valley floor is relatively flat and stands at an elevation about 300 meters (1,000 feet) above sea level. The surrounding land rises to 1,000 meters (3,000 feet) east and west of the valley, and high-elevation, volcanic cinder cones dot the rim. By studying ancient sediments, fossil remains, and occasional artifacts from the high-elevation sites, geologists have pieced together the history of a lake that rose and fell multiple times over the past 18,000 years.

Two high-elevation sites, known to the researchers as SANC and NAMC, occur along the northern margin of Suguta Valley and are shown in the close-up image (bottom). These cinder cones are part of a broad volcanic complex between the Suguta Valley and Lake Turkana to the north. During a protracted period when Lake Suguta was overflowing into Lake Turkana, wave action carved notches and terraces into these fossil shorelines.

Lake Suguta, which once filled today’s dry valley, reached its maximum height several times in the past 13,000 years. The sprawling lake was influenced by the African Humid Period. Estimated to have lasted from 14,800 to 5,500 years ago, the period was marked by recurring swings of water levels in the tropics. Near Lake Suguta, conditions were wetter than today. Starting about 8,000 years ago, however, the lake level dropped dramatically, falling from 570 meters (1,870 feet) to about 320 meters (1,050 feet) above sea level.

Falling water levels are not the only changes at Lake Suguta over the past several millennia. The lake valley lies within the East African Rift System, where tectonic plates are moving away from each other. As a result, tectonic activity in this region has deformed the shorelines of the ancient lake. 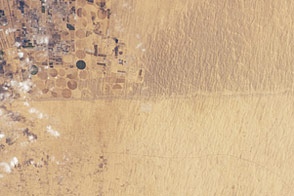