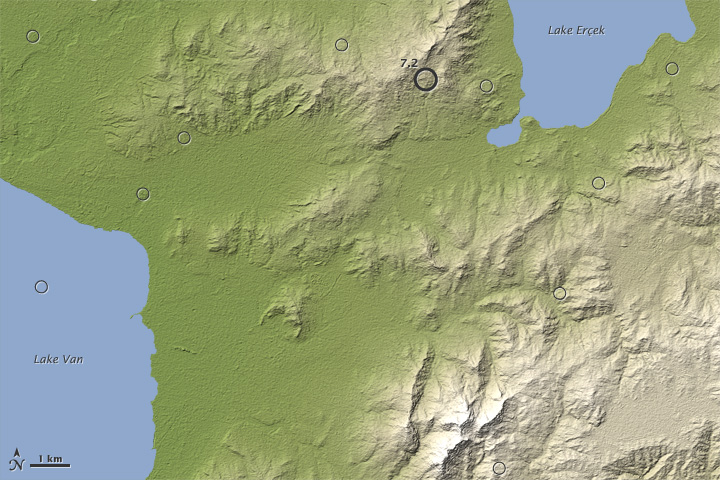 This image shows the region where the main earthquake and numerous aftershocks occurred on October 23 and the morning of October 24. Water appears in blue, and land appears in shades of green and beige. On land, the higher the elevation, the lighter the color. Earthquakes appear as black circles, with bigger circles indicating stronger quakes.

The quakes occurred in a mountainous region not far from the Iranian border. The USGS explains that this seismically active region experiences many destructive quakes, thanks to the collision of the Arabian and Eurasian Plates. The motion of these plates toward each other squeezes a large piece of the continental crust known as the Anatolian Block. As a result, the Anatolian Block moves westward, something that has happened in earlier quakes.

The earthquakes in late October 2011 occurred in the region where two mountain ranges, the Zagros and Alborz, meet. Geologist Chris Rowan explains that both mountain ranges have apparently resulted from the ongoing collision of the Arabian and Eurasian Plates.

The quake took a deadly toll in southeastern Turkey. On October 24, Hurriyet Daily News reported that the death toll had risen to 239, with 1,300 injured. As search-and-rescue efforts continued, those numbers were expected to climb.

A strong earthquake struck Turkey in late October 2011. This image maps the quake and aftershocks onto the mountainous landscape of eastern Turkey.