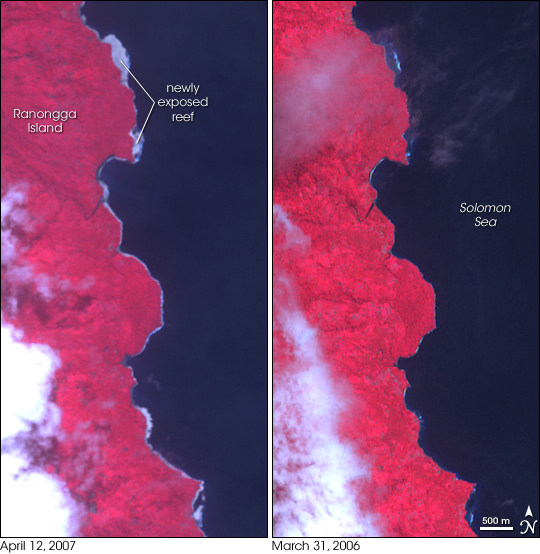 When people talk about change happening on a geologic time scale, most of the time, they mean that the change happens over the course of millions of years: the Colorado River gradually cuts through the soft rock of the Colorado Plateau until it has made a 4,000-foot-deep chasm, the Grand Canyon; continents drift centimeters at a time, slowly changing the shape and position of landmasses on the Earth. Most of the time, change is slow, but sometimes, geologic change happens all at once. This was the case on Ranongga Island in the Solomon Islands. In the early morning hours of April 2, 2007, a magnitude 8.1 earthquake shook the Solomon Islands, its epicenter southwest of Ranongga Island. The huge quake pushed much of the island up, raising the coral reefs that ringed the island above the water. In the course of a few minutes, Ranongga Island acquired several meters of new beach.

The newly exposed reef forms a gray rim along the eastern shore of the island in the left image, acquired by the Advanced Spaceborne Thermal Emission and Reflection Radiometer (ASTER) on April 12, 2007. In the right image, taken on March 31, 2006, the shallowly submerged reefs color the water a lighter shade of blue. The uplift may be more dramatic than the images show. When ASTER took the 2007 image, the tide was 29.4 centimeters higher than it was when the 2006 image was taken, and yet the uplift is still visible. The lush vegetation that covers the tropical island is bright red in this image, which is made from both visible and infrared light.

Out of its aquatic environment, the reef died, becoming the foundation of new land. Such evolution is common in earthquake zones in the Pacific and Indian Oceans. During the December 26, 2004, earthquake that generated the massive Indian Ocean tsunami, Simeulue Island was lifted as much as 150 centimeters (4.9 feet), exposing the reef that surrounded it. A similar set of exposed fossilized reefs on the shores of Papua New Guinea, near the Solomon Islands, provided proof that wobbles in the Earth’s orbit trigger ice ages.

An earthquake in the Solomon Islands lifted Ranongga Island as much as three meters, exposing reefs around the island.