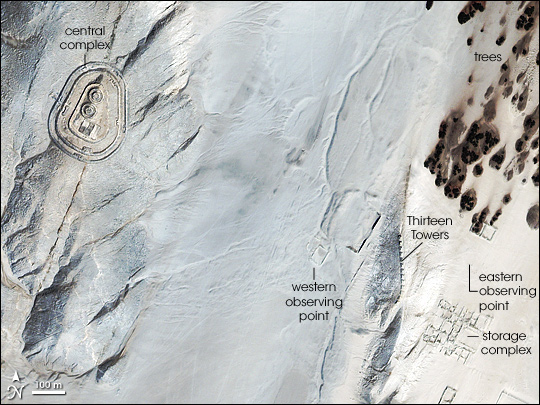 About 400 kilometers (250 miles) north of Lima, Peru, lies an enigmatic, 2,300-year-old ruin named Chankillo. Archaeologists have nicknamed the ruin’s central complex the “Norelco ruin” based on its resemblance to a modern electric shaver. The building’s true purpose long eluded them. Its thick walls and hilltop location suggested it was a fort, but why, researchers wondered, would anybody build a fort with so many gates and without a water source? Then in March 2007, two researchers, Ivan Ghezzi and Clive Ruggles, offered an explanation for the complex: at least part of it was a solar observatory.

GeoEye’s IKONOS sensor captured this image of Chankillo on January 13, 2002, and this picture shows the features the archaeologists studied to infer the site’s purpose. The central complex appears in the upper left with its concentric rings of fortified walls. Southeast of the central complex are the Thirteen Towers, which vaguely resemble a slightly curved spine. On either side of the towers are observing points (little is left of the eastern observation structure), and south of the eastern observing point is another building complex, apparently used in part for food storage. Although the dark shapes in the northeast seem like rock outcrops, the higher-resolution image reveals they are probably trees.

The Thirteen Towers were the key to the scientists conclusion that the site was a solar observatory. These regularly spaced towers line up along a hill, separated by about 5 meters (16 feet). The towers are easily seen from Chankillo’s central complex, but the views of these towers from the eastern and western observing points are especially illuminating. These viewpoints are situated so that, on the winter and summer solstices, the sunrises and sunsets line up with the towers at either end of the line. Other solar events, such as the rising and setting of the Sun at the mid-points between the solstices, were aligned with different towers.

Why did the ancient inhabitants of this region cultivate such a thorough understanding of solar cycles? In addition to potential ceremonial purposes, the observatory may have had practical uses as well. In Peru's dry coastal reason, precipitation is seasonal, so a reliable solar calendar would help determine the optimal time to plant crops.