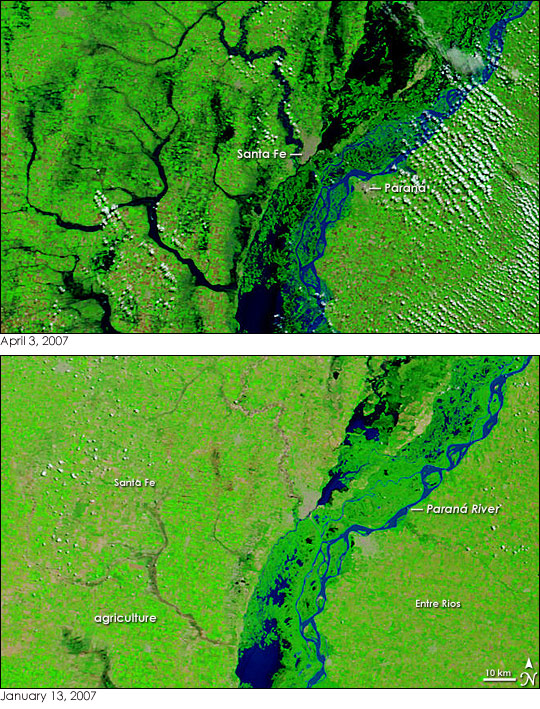 Already swollen from late summer rain, Argentina’s Paraná River and its tributaries burst their banks under the onslaught of extreme rain during the last week of March 2007. When the clouds cleared on April 3, 2007, the Moderate Resolution Imaging Spectroradiometer (MODIS) on NASA’s Terra satellite captured the top image of the floods in the Santa Fe and Entre Rios states, where the flood damage was worst. In the center of the image are the two state capitals, Santa Fe and Paraná. The cement-colored cities sit on opposite banks of the river, and both sustained significant damage in the floods.

Dark bands of water encroach on the cities in the top image. The lower image, taken on January 13, 2007, before the unusually heavy late-summer rains began, shows the river and its tributaries under dry-season conditions. Both images were made from infrared and visible light to highlight the presence of water, which is black or dark blue in this type of image. Clouds are light blue and white, plant-covered land is green, and bare ground is tan-pink. The variegated green and tan land on either side of the river is agricultural land. In contrasting the two images, it is clear that not only have the wetlands and rivers expanded in the April 3 image, but tiny flecks of black in between the rivers indicate that farmland is flooded as well.

According to the United Nations Office for the Coordination of Humanitarian Affairs (OCHA), the governor of Santa Fe called March’s extreme rainfall “the most radical climatic phenomenon of the last 100 years.” Up to 500 millimeters of rain fell over parts of Santa Fe in the span of a week, where the average annual rainfall is 900-1,000 millimeters. The rain left four million hectares (15,000 square miles) flooded, which affected more than 70,000 people, said OCHA. Several cities were flooded, including Santa Fe and Paraná, and as many as 20 were completely isolated. Damage in Paraná was estimated to be over 10 million dollars.

Already swollen from late summer rain, Argentina’s Paraná River and its tributaries burst their banks under the onslaught of extreme rain during the last week of March 2007.