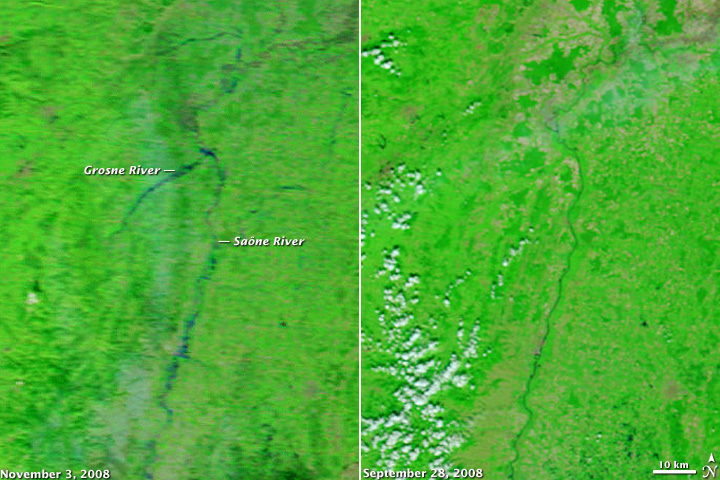 Intense rain swelled rivers in east-central France on November 2 and November 3, 2008, forcing hundreds of evacuations and closing two major highways, reported the AFP news service. The Moderate Resolution Imaging Spectroradiometer (MODIS) on NASA’s Terra satellite captured this image of flooding along the SaÃ´ne River and its tributaries on November 3, 2008. Compared to normal conditions, as represented by the Terra MODIS image from September 28, the river was much wider. Its banks are less clearly defined, more of a bruise than the crisp line seen a few weeks earlier. The Grosne, a tributary, is wider than the SaÃ´ne, even though it is not usually visible.

The SaÃ´ne flows south into the city of Lyon, where it joins the Rhone River. Lyon is immediately south of the area shown in this image.

These false-color images combine infrared and visible light to bring out the presence of water on the ground. Water is dark blue, while plant-covered land is green. Bare or sparsely vegetated land, including cities, is tan. Clouds are pale blue and white.