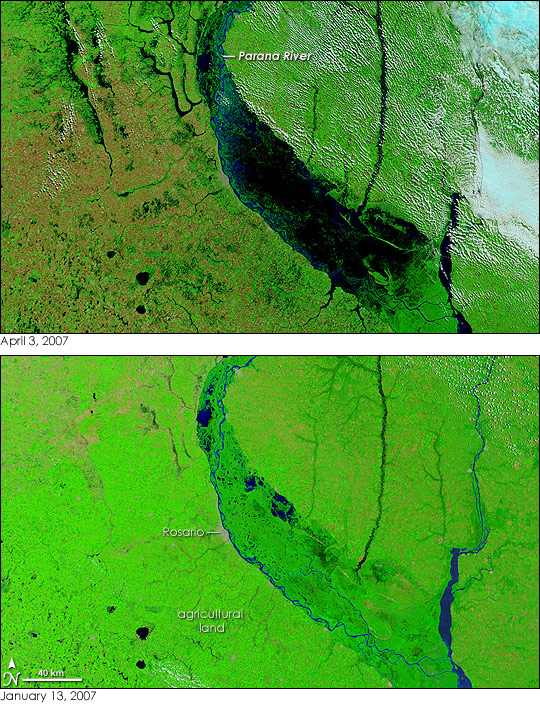 One of South America’s longest rivers, the Parana winds south from its headwaters in central Brazil through Paraguay and Argentina to empty into the Atlantic Ocean near Buenos Aires, Argentina. Near its mouth, the river widens into a multi-stream delta where it joins the Uruguay River to form the broad Rio de la Plata estuary. Small and neatly defined at the height of summer in mid-January, the delta section of the river stretched kilometers across its flood plain in response to unusually heavy late-summer and early-autumn rains by April. The top image, taken on April 3, 2007, shows that not only has the river expanded into a broad black band, but its tributaries are also swollen. Flecks of black south and west of the river show where water covers agricultural fields.

These images, both collected by the Moderate Resolution Imaging Spectroradiometer (MODIS) on NASA’s Terra satellite, were made with a combination of visible and infrared light to increase the contrast between mud-colored water and land. In these images, water is black or dark blue, and clouds are pale blue and white. Plant-covered land is bright green, and bare earth is tan. In the lower image, taken at the height of the growing season, the agricultural fields are green. By April, the crops had been harvested and the land left bare. The slightly orange color suggests that the fields may have been burned to clear away the stubble. Hugging the west bank of the Parana River, the city of Rosario is a gray-colored spot on the landscape.

The floods extend north beyond the top edge of this image, affecting nearly four million hectares (15,000 square miles) and more than 70,000 people in two Argentine states, said the United Nations Office for the Coordination of Humanitarian Affairs (OCHA). The flooding was amplified when up to 500 millimeters of rain—more than half the average yearly rainfall—fell over northern Argentina in the span of a few days at the end of March, said OCHA.

Already swollen from late summer rain, Argentina’s Paraná River and its tributaries burst their banks under the onslaught of extreme rain during the last week of March 2007.