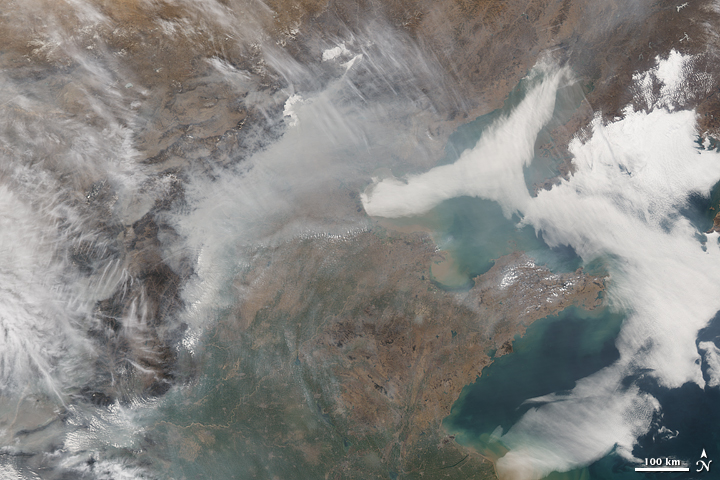 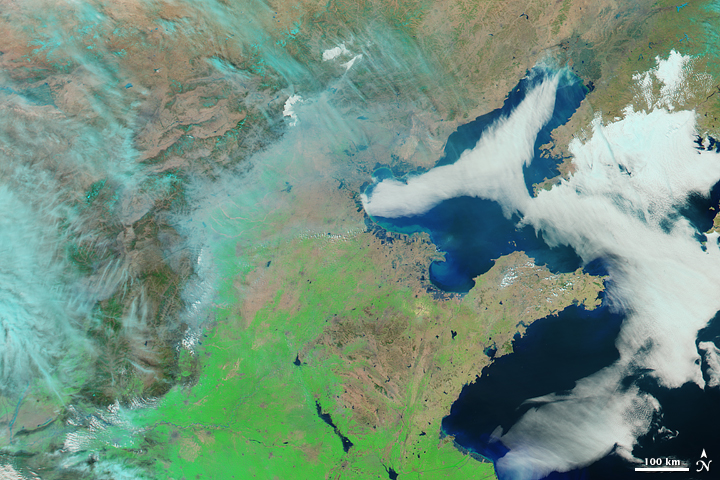 Thick haze collected over the Beijing region in late March 2007. Earlier that month, the BBC News reported that an international team of scientists had documented how increasing pollution in China led to decreasing rainfall over the region.

The Moderate Resolution Imaging Spectroradiometer (MODIS) flying onboard the Aqua satellite captured these images of the Beijing region on March 22, 2007. The top image is a “true-color” picture, similar to a digital photo. The bottom, “false-color,” image uses a combination of visible and infrared light to more clearly show vegetation, water, and clouds. Even sparse vegetation appears bright green, while water appears deep blue (bright blue when tinged with sediment). Clouds dominated by water droplets appear white, while clouds made of ice crystals appear light blue.

The false-color image highlights water bodies, perhaps aqua-culture ponds, that are all but invisible in the true-color image, especially along the shores of the Bo Hai. While vegetation and water show up more clearly in the false-color image, haze is much more transparent. Although dingy gray haze dominates the true-color picture, it is all but invisible in the false-color view. The haze “disappears” in the infrared-enhanced image because tiny haze particles do not reflect longer-wavelength infrared light very well, making this type of image useful for distinguishing haze from clouds. The bank of clouds in the upper right corner shows up clearly in both pictures.

As China industrializes, factories, power plants, and automobiles all contribute to pollution in the region. In examining pollutants and rainfall, the team of scientists examined records covering more than 50 years, concluding that pollution decreased precipitation at Mount Hua near Xi’an in central China. They concluded that when conditions are so hazy that visibility is reduced to less than 8 kilometers (5 miles), hilly precipitation can drop by 30 to 50 percent. When moist air passes over mountains, it usually cools and forms raindrops, but heavy pollutant concentrations cause the clouds to hang on to their moisture.

Thick haze collected over the Beijing region in late March 2007. Earlier that month, the BBC News reported that an international team of scientists had documented how increasing pollution in China led to decreasing rainfall over the region.

Haze mingled with clouds in the skies over eastern China in late March 2007.