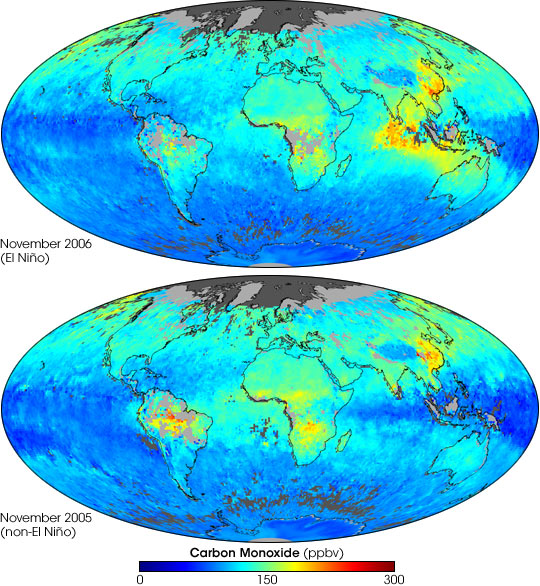 Who is responsible when smoke fills the sky? Do people who set agricultural fires deserve the blame, or are natural cycles the real culprit? The correct answer may be “yes.” In the case of wildfires in Indonesia, human activity and natural cycles likely conspire to create devastating fire seasons. Fire has long served as a cheap, easy means of clearing land for crops and tree plantations. While some fires die out before causing extensive damage, others burn out of control, invading nearby forests. The deciding factor in whether human fire activity will escalate into catastrophic burning in Indonesia appears to be may be the occurrence of El Niño.

Among other gases, fires emit carbon monoxide, making the gas a good indicator of fire-related pollution levels. These images compare carbon monoxide concentrations at an altitude of about 3 kilometers in an El Niño year (November 2006) versus a non-El Niño year (November 2005). The data were collected by the Measurements of Pollution in the Troposphere (MOPITT) sensor on NASA’s Terra satellite. Values range from little or no carbon monoxide (blue) to 300 parts per billion (red). In some areas, persistent cloud cover or gaps in the satellite orbit prevented data collection, and these areas appear light gray over land, or dark gray over the ocean. Compared to 2005, November 2006 shows much more carbon monoxide pollution over Indonesia and its neighbors.

This connection between Indonesian carbon monoxide levels and Niño was documented by group of researchers from the National Center for Atmospheric Research, the National Oceanic and Atmospheric Administration’s Earth System Research Laboratory, and Toronto University. The research team studied carbon monoxide levels since the start of the MOPITT data series in 2000 and found that fires were worse during El Niño events in 2002, 2004, and 2006. El Niño worsened fires by reducing rainfall and drying out forests on Borneo and Sumatra. In the drought conditions, agricultural fires burned out of control.

Forest fires can lead to significant deforestation, especially in places already degraded by logging or previous fire. There are also concerns about the stability of peat deposits in the region’s swampy, lowland forests. Peat—thick layers of partially decayed vegetation—is both extremely flammable and a repository for carbon. Peat burning releases not just carbon monoxide, but also carbon dioxide, a greenhouse gas. 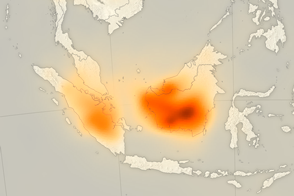