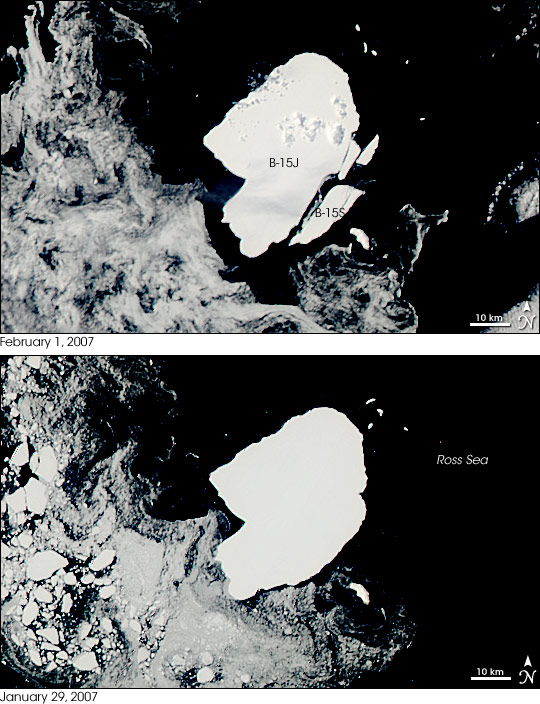 In March 2000, an iceberg the size of a small U.S. state cracked off the leading edge of Antarctica’s Ross Ice Shelf. Originally the giant berg, named B-15, was about 300 kilometers long and 40 kilometers wide (186 miles long by 25 miles wide). The near-Connecticut-sized iceberg calved into many pieces over subsequent years; many of the “offspring“ were themselves large enough to be named by the National Ice Center.

On February 1, 2007, one of the original berg’s descendants, B-15J, shed several smaller icebergs. This pair of images from the Moderate Resolution Imaging Spectroradiometer (MODIS) on NASA’s Aqua satellite shows B-15J on January 29, 2007, and again on February 1. On February 1, three bergs have split off the southeastern quadrant of B-15J. The largest piece, about 10 nautical miles (18.5 kilometers) on its longest axis and 2 nautical miles (3.7 kilometers) at its widest, was named B-15S.

New bergs in Antarctic waters, one of the Earth’s most remote regions, are often first spotted from the remotest of vantage points: space. The new berg was first spotted by scientists at the Antarctic Meteorological Research Center at the Space Science and Engineering Center at University of Wisconsin-Madison. The Antarctic Meteorological Research Center uses daily MODIS imagery along with images from other NASA and NOAA satellites to track the formation and movement of icebergs in Antarctica for both scientific and navigational purposes.

In the years since it calved, B-15 dramatically influenced the circulation of the Ross Sea, at one point trapping a huge amount of sea ice against the shoreline. The bergs and the sea ice became a significant navigational challenge for ships trying to supply research bases in Antarctica. To read about how NASA satellites helped in re-supply efforts, please read the feature article “Operation Antarctica.”

In March 2000, an iceberg the size of a small U.S. state cracked off the leading edge of Antarctica's Ross Ice Shelf.