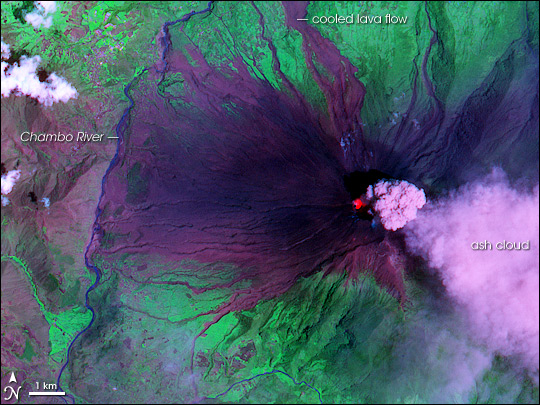 The Tungurahua Volcano in Ecuador underwent a severe eruption in August 2006, followed by intermittent eruptive activity over the next couple months. On October 16, 2006, the Advanced Spaceborne Thermal Emission and Reflection Radiometer (ASTER) on NASA’s Terra satellite captured this image of the volcano as it released a plume of volcanic ash.

This false-color image was created by combining shortwave infrared, near-infrared, and green wavelengths of light observed by ASTER. The image clearly shows not only current volcanic activity, but also the results of earlier eruptions. Deep purple rivulets of rock carve through the bright green vegetation. The rock results from previous lava flows that later solidified. Similar in color to the hardened lava are geometric patches of bare ground on the volcano’s slopes, some of the numerous settlements in the area.

The Chambo River makes a bright blue ribbon along the western edge of the volcano. Pyroclastic flows of rocks, ash, and other volcanic materials temporarily dammed the Chambo River in August 2006, and the purple remains of earlier eruptions cross this river in the west and the north. At the volcano’s summit is a glowing red dot, indicating an area of intense heat. The ash cloud in this image appears bright purple, in contrast with the white clouds to the northwest.

Volcanic Eruptions on the Kamchatka Peninsula