Mudslides in the Philippines 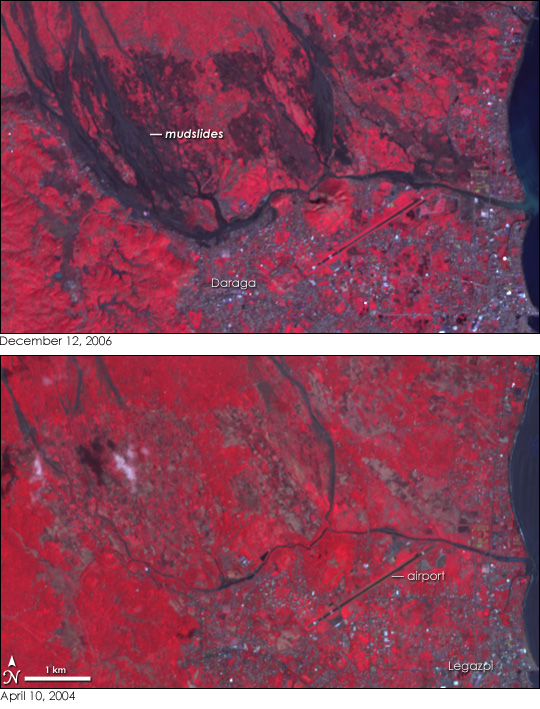 Mayon Volcano, steep-sided and symmetric, rises 2,462 meters above the Albay Gulf and the city of Legazpi, the regional capital, with a population of more than 150,000. The most active volcano in the Philippines, Mayon turned deadly on November 30, 2006, but it wasn’t an eruption that caused the damage. The volcano had been pumping out ash and lava since July 2006, leaving a layer of loose ash and rock on its surface. On November 30, Typhoon Durian unleashed heavy rain on the island nation, and the water mixed with loose ash to create deadly mudslides. The mudslides swept over populated regions on the south and west slopes of the volcano, leaving an estimated 1,000 dead, said the Associated Press.

The extent of the disaster is apparent in this image, taken by the Advanced Spaceborne Thermal Emission and Reflection Radiometer (ASTER) on NASA’s Terra satellite on December 12, 2006. Mudslides are black against bright red plant-covered land in this image. Populated areas, such as the city of Legazpi and its neighbor, Daraga, are cement gray, with flashes of silvery white made by highly reflective surfaces. Larger squares of tan north of the cities are probably agricultural fields.

The lower image, taken on April 10, 2004, provides a view of conditions before the 2006 mudslides. In the two years that elapsed between the two images, the city appears to have grown. Squares of red plant-covered areas have been replaced by silver-gray city, particularly in Daraga. Silvery squares extending along the western edge of the mudflow indicate that the city probably extended farther up the mountain, possibly in some of the area covered by mud. Much of the agricultural land visible in the 2004 image has been buried by the mud flow. The area shown here is just one of the regions devastated by landslides after Typhoon Durian. Additional slides over the city of Guinobatan, west of the area shown here, are visible in the large image.