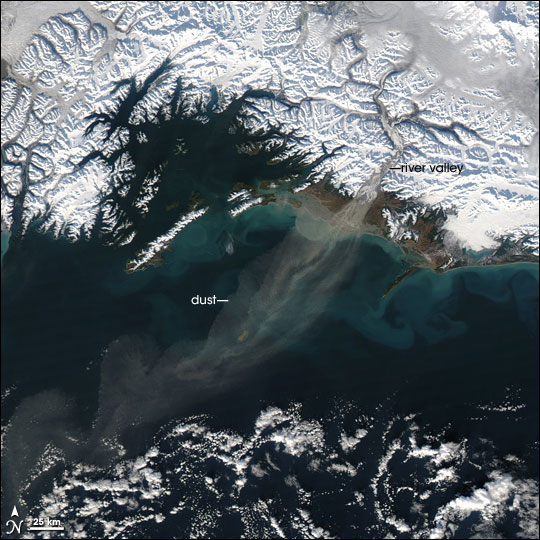 A dust storm of glacial sediments blew off the Alaskan coast on November 1, 2006, almost exactly one year after a more intense dust storm blew out of the same spot: the Copper River Valley. The Moderate Resolution Imaging Spectroradiometer (MODIS) flying onboard the Aqua satellite took this picture on November 1. The dust appears as a translucent beige plume in this image, creating swirls over the ocean that vaguely mimic the shapes of nearby clouds.

Dust storms usually call to mind visions of hot, sandy deserts, but storms can also form at high latitudes. Over time, the movement of glaciers grinds the rocks below them to fine silt, also known as loess. Glacial sediments can even form dunes along Alaskan river valleys. Chinook winds, sometimes called foehn winds, push the glacial sediment toward the sea. These intense, warm winds blow down mountain valleys, often taking the glacial silt with them. Because their primary movement is downward rather than lateral, these downslope winds can actually change direction with the mountain valleys they travel. A close look at this picture shows the dust storm turning corners, following the Copper River Valley on its way to the sea.

A cloud of dust extends hundreds of kilometers over the Arabian Sea in this true-color image from November 11, 2009.