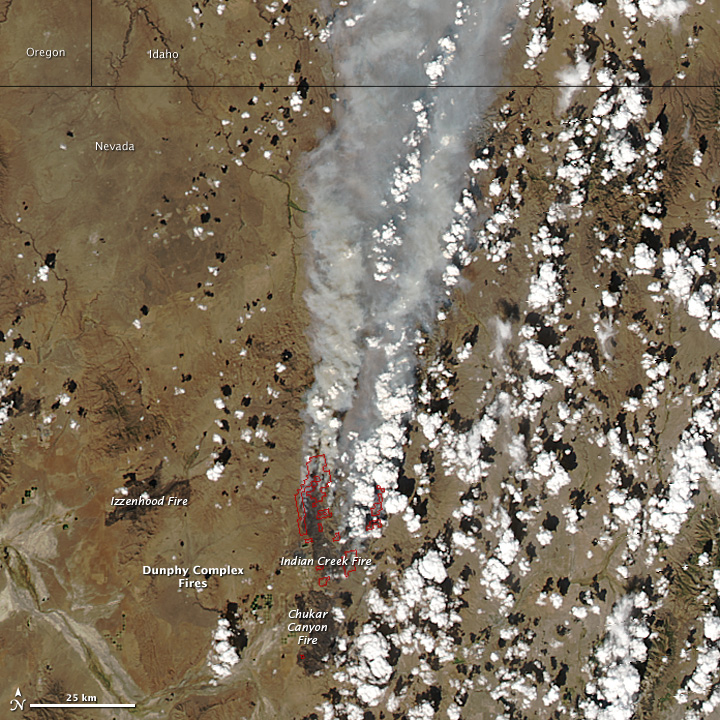 Ignited by lightning on September 30, 2011, the three fires in the Dunphy Complex raced through sagebrush and grass in northern Nevada during the first week of October. By October 6, the fires had burned 204,487 acres in a remote area between the towns of Elko and Winnemucca.

The Moderate Resolution Imaging Spectroradiometer (MODIS) on the Aqua satellite took this image on October 3 when gusty winds pushed the fires to double their size. Active fires are outlined in red.

Dense smoke rises from the Indian Creek fire, the largest of the three in the complex. The smoke blows north into northern Idaho, before becoming too thin to be seen in the satellite image. The Chukkar Canyon and Izzenhood fires show less activity, but dark, charred land reveals where the fires burned.

On October 3, the fast-moving fires grew from a collective 88,000 acres to 160,000 acres and forced the evacuation of the community of Tuscarora. They also caused power outages at mining operations in the region, reported the Elko Interagency Dispatch Center. The Dunphy Complex became the top priority for wild land fire fighters in the United States that day. Cooler weather and rain helped suppress the fires from October 4 through October 6.