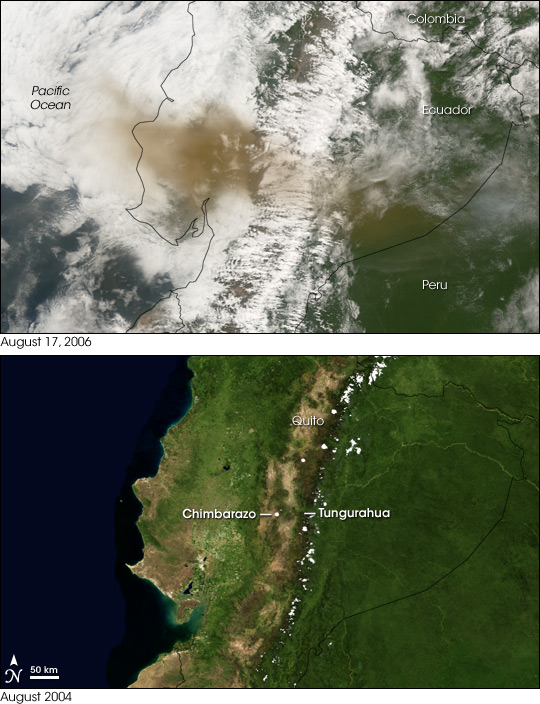 Dozens of people were missing, hundreds of families were evacuated, and three villages were gone in the wake of an eruption of the Tungurahua Volcano in mid-August 2006. A month earlier, the volcano affected nearby residents and agriculture, but this eruption was worse. According to news reports, a serious eruption began on August 16, 2006, sending a column of volcanic ash 8 kilometers (5 miles) into the sky and raining lava and hot rocks on the surrounding area. Nothing remained of the villages of Chilibu, Choglontuz, and Palitagua, and the flow of lava and molten rock blocked the Patate, Puela, and Chambo Rivers. As of August 18, at least five people had died, and more casualties were expected.

The Moderate Resolution Imaging Spectroradiometer (MODIS) flying onboard NASA’s Terra satellite took a picture of the region on August 17, 2006. It appears at top, and a Blue Marble image of the area from August 2004 appears at bottom, for comparison. The Blue Marble image is a composite of images collected over a month. In cloudy regions, monthly composites are necessary to compile cloud-free images. Clouds filled the sky a day after the Tungurahua eruption, but damage was still apparent. The dark brown smudges likely result from volcanic ash from the volcano. One smudge, over 100 kilometers in length, appears in the west, mixed with clouds. A less discernible smudge appears in the east, where relatively clearer skies allow some of the dark land surface to show through.

One of Ecuador’s most active volcanoes, Tungurahua has a long history of building up edifices and later collapsing them with spectacular eruptions. Although the slopes of a volcano can be a dangerous place to live, many people take the risk because of the rich soils and the fairly mild temperatures that come with high altitude. This tradeoff placed thousands in harm’s way when Tungurahua erupted in the summer of 2006. Marked in the bottom image, Tungurahua’s neighbor, Chimborazo, is a dormant volcano that beckons many modern mountaineers. Also marked is Ecuador’s capital city of Quito.