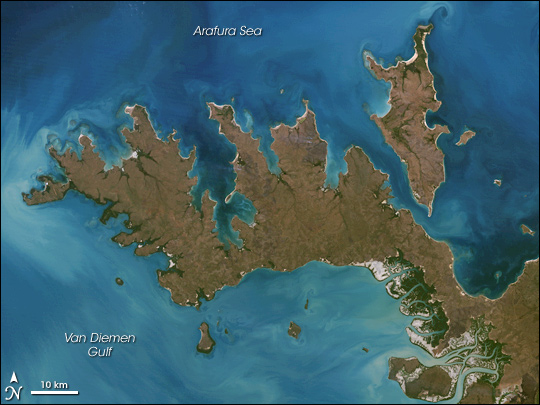 At the northern tip of Northern Territory, Australia, the Garig Gunak Barlu National Park spans the entire Cobourg Peninsula. The park also includes the surrounding waters of the Van Diemen Gulf and the Arafura Sea. Nearly the whole peninsula is Aboriginal land, and the park is managed as a sanctuary under the direction of traditional Aboriginal landowners. Diverse habitats—from coral reefs, to rainforests, to wetlands—are scattered across the park, which protects six different kinds of sea turtle and the largest wild herd of an Indonesian species of cattle, which is endangered in its native habitat. The first wetlands to be declared “Wetlands of International Importance“ by the Ramsar Convention on Wetlands international treaty are located in this park.

This photo-like image of Garig Gunak Barlu National Park and the surrounding waters was captured by NASA’s Landsat 5 satellite on July 30, 2006. Though it looks like an island, the peninsula is a narrow strip of land deeply carved by numerous bays, especially in the north, where white, sandy beaches create a bright perimeter. The southern coastline is dominated by mangrove forests, which appear deep green in the image, interspersed with sand and mudflats, which appear white. The coastal waters are filled with sediment churned up by tides and stream outflow; the swirling sediment steaks the blue waters with white ribbons. The dominant vegetation type on the peninsula is open eucalyptus woodland. The openness of the woodland means that the peninsula isn’t blanketed with green; the reddish color of much of the landscape is from the soil.

To the Inukitut-speaking peoples of the Canadian Arctic, northern Baffin Island is Sirmilik, “the place of the glaciers.” When Canada established the area as a National Park in 2001, they gave it the same name.