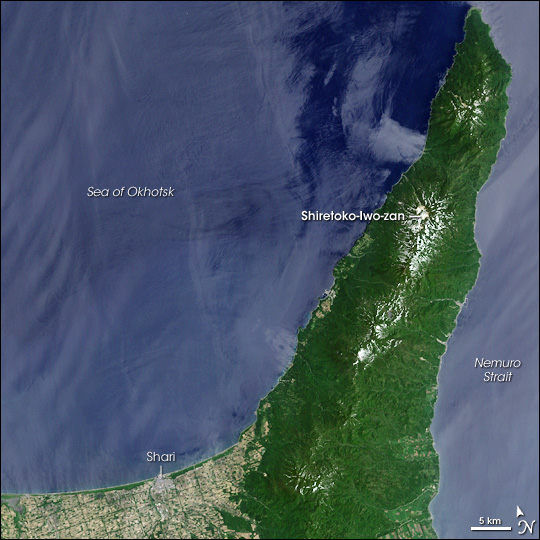 In the northeastern corner of the northernmost Japanese Island, Hokkaido’s Shiretoko Peninsula provides the mostly temperate country with a taste of the Arctic. Reaching out into the Sea of Okhotsk, the peninsula is the southernmost Northern Hemisphere latitude that sees sea ice in winter. The sea ice is a key part of the marine ecosystem, and it enriches the area’s productivity and biodiversity. Shiretoko comes from the language of the region’s native Ainu inhabitants, derived from a word that means “The End of Mother Earth.” A national park since 1964, Shiretoko became a United Nations Education and Scientific Organization (UNESCO) World Heritage Site in 2005.

This image from the Landsat 7 satellite on June 20, 2000, shows the Shiretoko Peninsula, the surrounding Sea of Okhotsk, as well as a bit of the city of Shari at the bottom, left of center. The tan and green grid pattern of the city suggests developed areas crisscrossed with tree-lined streets. Compared to the city, the Shiretoko World Heritage Site is amazingly lush, with largely unbroken forest spanning the peninsula like an emerald blanket. Even on the precipice of summer, snow dusts high mountain peaks. Roughly the northern quarter of the peninsula is roadless, and minimal human influence in the area has allowed wildlife to thrive.

The large peak just north of the middle of the peninsula is the Shiretoko-Iwo-zan Volcano, a 1,565-meter (5,135-foot) stratovolcano, a steep-sided, symmetrical peak made of layers of lava flows, volcanic ash, cinders, and blocks of rock. According to the Smithsonian Institution Global Volcanism Program, people refer to Shiretolo-Iwo-zan as one of Japan’s “sulfur mountains” because it extruded molten sulfur during eruptions in 1889 and 1936.

To the east, the Nemuro Strait separates Hokkaido from an archipelago called the Kurile Islands (not pictured). This strait is a rich source of seafood for Japan, including scallops, clams, and sea urchins.

Hokkaido’s Shiretoko Peninsula provides mostly temperate Japan with a taste of the Arctic.

This wintry scene of a frozen ocean and snow-covered land may not seem remarkable until you note that the Shiretoko Peninsula is at the same latitude (44 degrees North) as central Oregon on the other side of the Pacific Ocean.