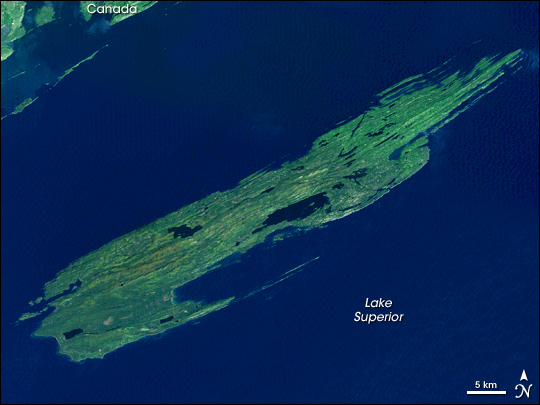 Isle Royale National Park includes a group of islands and the surrounding waters of Lake Superior. The entire park takes in 2,200 square kilometers (850 square miles), including the territory up to 4 kilometers (2.5 miles) out from shore. Access to the park is via seaplane or ferry service, and from November through mid-April each year, the park is completely closed to visitors. This isolation has allowed the park to remain relatively pristine, one of the reasons it was designated a U.S. Biosphere Reserve in 1980. All but a tiny fraction of the park is federally designated wilderness.

This natural-color Landsat 7 satellite image shows Isle Royale National Park in Lake Superior. The most striking aspects of this image are the deep blue waters of the lake around the main island and the long parallel ridges running the 72-kilometer (45-mile) length of Isle Royale. These ridges formed from lava flows some 1.2 billion years ago. They have eroded and weathered in the eons since, and most recently, they were scoured by an ice sheet during the last ice age. A subtler feature is what you do not see: the entire park is roadless. Visitors to the park either use the network of hiking trails or travel around in small boats. Ferries from the U.S. mainland also offer cruises around parts of the island.

The isolation from the mainland is one key reason that the area was designated a biosphere reserve. Among other kinds of wildlife, the island has populations of moose and wolves. The isolation of the island allows field biologists to track predator-prey relationships with fewer potential sources of confusion and to observe the impact of sudden change on the relationship. As recently as 1900, there were no moose on the island at all. On the other hand, lynx, caribou, and coyotes, all now absent, were observed by visitors.

Biologists believe that moose swam from the mainland at some point early in the twentieth century. In a land with abundant food (at least initially) and no predators, their population grew unchecked until they overgrazed. Eastern timber wolves were first recorded on the island in 1949, having traveled to the island over 15 miles of water during the exceptionally cold winter, when an ice bridge linked the island to the mainland. The wolf and moose monitoring program has been running continuously since 1958. It tracks the influence of weather patterns on populations, inter-pack warfare, survival rates of wolf cubs and moose calves, and grazing and predation patterns. Beaver, fox, hares, and a host of other woodland creatures also make their home on the island archipelago, where their complex interactions are easier to track than they would be on the mainland. Confusing factors such as predation by domestic animals are absent since pets are banned.

The park offers its wilderness experience for visiting humans too, with 36 campgrounds and 265 kilometers (165 miles) of hiking trails connecting them. Nor are park visitors the first humans in the area. Archaeological evidence points to seasonal presence of Native Americans who came and, among other things, mined and smelted copper for trade and tools. Settlers used the area during the 1800s and early 1900s before the park was established in 1940. Lake Superior was and still is a major seaway, and historical lighthouses dot the island where they once warned ships of dangerous shallows. Shipwrecks also testify to the dangers, and are sites for diving for the more intrepid visitors to the park.

This satellite image is a merged pair of scenes obtained with the Landsat 7 Enhanced Thematic Mapper Plus instrument. The northeastern section of the scene was obtained on July 4, 2000; the southwestern section on September 25, 2001.