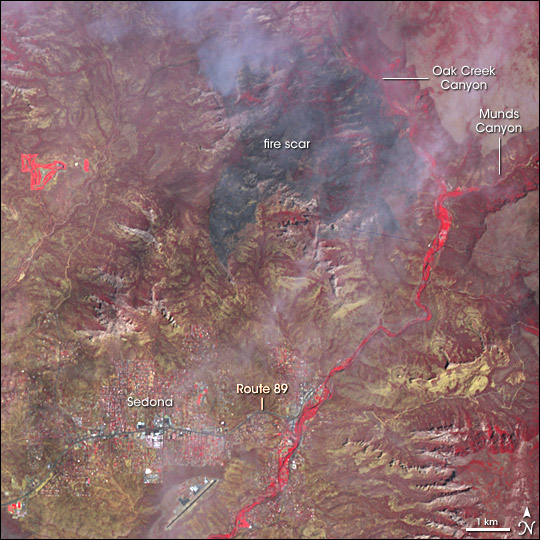 Northeast of Sedona, Arizona, the Brins Fire continued to threaten parts of Oak Creek Canyon on June 23, 2006. This image from the Advanced Spaceborne Thermal Emission and Reflection Radiometer (ASTER) on NASA’s Terra satellite shows the Brins Fire and the town of Sedona. The image doesn’t appear exactly like a digital photo because it uses ASTER’s observations of shortwave and near-infrared light to make the burned area stand out from the unburned vegetation. Vegetation appears red, the burn scar appears charcoal, and bare ground or thinly vegetated ground appears tan or yellow. Route 89, sections of which have been closed by the fire, runs in a gray ribbon through Sedona and Oak Creek Canyon. The haze in the scene may be a mixture of smoke and thin clouds.

According to reports from the National Interagency Fire Center on June 26, the Brins Fire was threatening residences, commercial structures, endangered species habitat, and the Oak Creek watershed and Scenic Highway. On that date, the agency estimated the fire was 4,222 acres and about 50 percent contained.

In mid-June 2006, the Brins Fire was burning rapidly in Coconino National Forest and threatening homes near Sedona, Arizona.