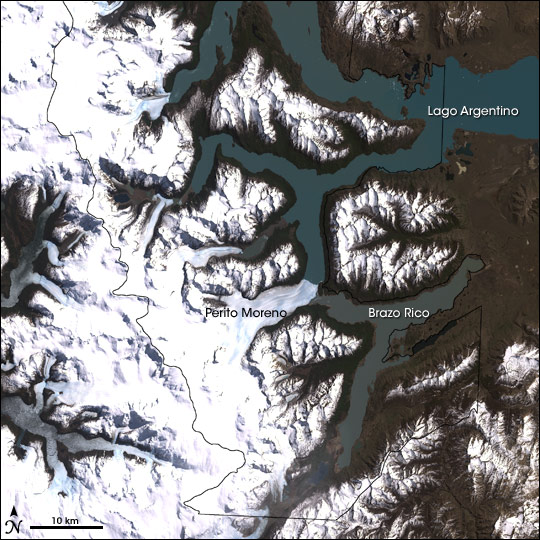 Los Glaciares National Park in Argentina encompasses mountains, lakes, forests, and glaciers in the Andes along the Chilean border. The United Nations Educational, Scientific and Cultural Organization declared this area a World Heritage Site in 1981. The park provides a home for guanacos, pumas, foxes, and many bird and fish species.

This Landsat image, acquired on October 14, 2001, shows the southern portion of Los Glaciares National Park. Snow and ice are white, water is blue, and bare or thinly vegetated ground is brown. Over time, glacial melt has formed two lakes in this park: Lago Viedma and Lago Argentino (shown in this image). Lago Argentino has an unusual feature: the Perito Moreno Glacier, appearing in more detail in this astronaut photograph, periodically dissects the lake. As the glacier advances, it cuts off one side of the lake, known as Brazo Rico, from the other side. Over time, the water level of Brazo Rico rises enough to break off the tip of the glacier. After rupturing the glacier, Brazo Rico dumps its excess water into the other side of the lake. Water pressure ruptures the Perito Moreno Glacier every four or five years on average, although the pattern of ruptures is irregular.

Besides the periodic ruptures of the Perito Moreno Glacier, the park offers other feasts for the eyes, including the rugged Cerro Torre and Mount Fitz Roy, named for Robert Fitz Roy, who captained the Beagle on Charles Darwin’s famous voyage. These tall, jagged, granite peaks have been shaped by glacial ice, and their extremely steep slopes pose serious challenges for modern mountain climbers.