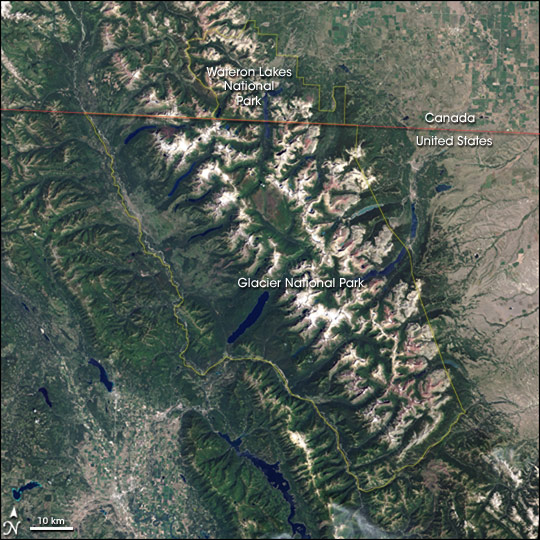 Glacier National Park in Montana sits at the northern border of the United States. In combination with Canada’s Waterton Lakes National Park, the area is the first International Peace Park, declared in 1932 to solidify the peaceful friendship between Canada and the United States and to provide a unified ecology across the border. The parks encompass over 400,000 hectares (1,000,000 acres) of mountainous terrain astride the Continental Divide. Native American lands buttress the park, with the Blackfeet Reservation to the park’s east and the Salish and Kootenai Confederated Tribes reservation to the southwest. Many sites within the park hold spiritual significance to the tribes and others in the area: Chief Mountain near the international border on the park’s eastern side is a traditional vision quest destination for American and Canadian tribes. Archaeological evidence suggests that the general area of Glacier National Park has been settled by humans for approximately 10,000 years.

This natural-color Landsat 7 image shows the full extent of the Glacier-Waterton Lakes International Peace Park. Forests are dark green, while lighter green is probably alpine meadows. Deep, dark blue lakes stretch through the bottoms of valleys. The pale blue lake in the park’s northeast corner is the shallow Lake Sherburne. The pale blue comes from light reflecting from the bottom of the lake back up to the Enhanced Thematic Mapper Plus (ETM+) sensor on the satellite. Pale pinks and occasional deep reds along the sides of the mountains in the park are bare, ice-free areas on the peaks where no vegetation is growing.

This image was acquired by ETM+ on July 7, 2001, well into summer. Thus, a good deal of the winter snow pack has melted on the peaks to reveal the bare rocks. The uppermost reaches of the tallest peaks, however, are capped in brilliant white snow. Between peaks are deep, U-shaped valleys that are the hallmark of glaciation. Much of the land in the park is shaped by the action of ice. This region was widely covered in glaciers approximately 11,000 years ago. As global climate patterns have shifted in the millennia since, much of the land formerly covered in ice gradually came to be revealed. Forests and meadows gradually established themselves. The small glaciers scattered through the park are remnants of the period of massive ice cover.

The U.S. Geological Survey (USGS) defines a glacier as perennial snow-ice mass larger than 0.1 square kilometers. By that definition, there are roughly 50 small glaciers in the park, plus a number of other areas that almost qualify. There has never been a comprehensive glacier-monitoring program throughout the entire park. Nevertheless, ground measurements at some sites have been conducted over several decades, and tree ring studies also provide some indication of climate conditions. All the glaciers in the park have retreated since initial measurements in 1901, and the tree ring data suggests this process began around 1850. At the time of the park’s foundation, there were more than 150 glaciers in the park. Because they are located at low altitude for Northern Rockies glaciers, and because they are well inland, they are unusually sensitive barometers to changes in the climate.

During 1920-40, when the area had above-average summer temperatures and below-average precipitation, glacier retreat was noted throughout the park. The colder and wetter period from 1960 through 1979 saw a number of the glaciers grow and advance. The long-term trend associated with climate warming has been a dramatic reduction in the number and size of glaciers in the park. According to the USGS Glacier Monitoring in Glacier National Park Website, “The larger glaciers are now approximately 1/3 their size in 1850 (range - 23-38%) and numerous smaller glaciers have disappeared. There has been a 73% reduction in the area of Glacier National Park covered by glaciers from 1850-1993. Only 27 km2 of glaciers remain from the 99 km2 which previously existed.”