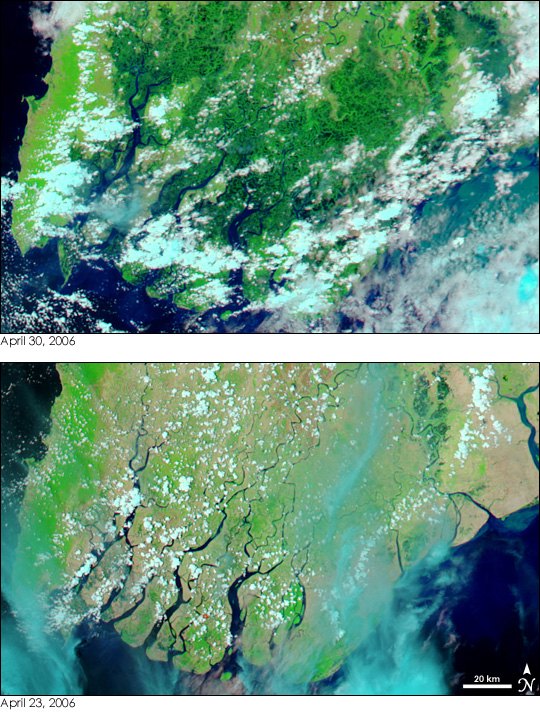 With winds near 210 kilometers per hour (130 miles per hour), powerful Cyclone Mala swept ashore over Myanmar (Burma) late on April 28, 2006. The storm inundated the Southeast Asian country with heavy rain and left widespread flooding in its wake. The wetlands surrounding the mouths of the Ayeyarwady (Irrawaddy) River were still dark blue and black with water when the Moderate Resolution Imaging Spectroradiometer (MODIS) on NASA’s Aqua satellite captured the top image on the afternoon of April 30.

Just a week earlier (lower image), the region had been dry, with water confined to the channels cut by the river as it drains into the Andaman Sea. The land is tan, with patches of green where plants are growing. Light clouds, blue and white in the false-color images, drift over the region. On April 30, the wetlands brimmed with water brought by the storm. Offshore, the ocean is milky blue and green where sediment carried by draining flood water has washed into the sea. Additional flooding can be seen farther north along the Ayeyarwady in the large image. According to the Myanmar state media, one person died and 21 others were injured in the storm.

The large images provided above have a resolution of 250 meters per pixel, MODIS’ maximum resolution. The MODIS Rapid Response Team provides daily images of Myanmar in several resolutions.