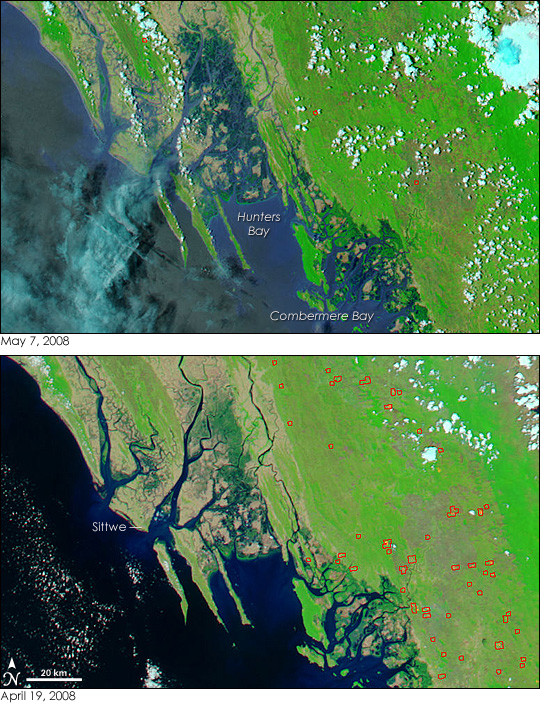 Cyclone Nargis devastated Burma (Myanmar) when it came ashore on May 3, 2008. As of May 7, the government estimated the death toll to be around 22,000, though the U.S. diplomat in the country said that more than 100,000 people may have perished, reported CNN.

The storm brought heavy rain and a powerful storm surge, causing wide-spread flooding. The low-lying Irrawaddy Delta took the brunt of the damage, but the Moderate Resolution Imaging Spectroradiometer (MODIS) on NASA’s Aqua satellite also detected coastal flooding farther north near the border with Bangladesh. The lower image, taken on April 19, 2008, provides a reference point to illustrate the extent of the flooding.

These images combine infrared and visible light to highlight the presence of water on the ground. Water is black or dark blue, while plant-covered land is green, and bare earth is tan. Clouds are pale blue and white. The tangle of rivers that drain into Hunters Bay flow together, covering the small delta with water. Near the lower edge of the image, the mouths of the Dalet River flow into Combermere Bay. The tiny islands formed by the draining river seem to dwindle under the cover of flood water. The largest city in the region is Sittwe. Though the rivers north of the city are flooded, the city itself shows little sign of flooding. Areas in which MODIS detected fires are outlined in red. The hottest fires glow orange in the infrared wavelengths of light used to make the image.

Daily images of Burma (Myanmar) are available from the MODIS Rapid Response System.