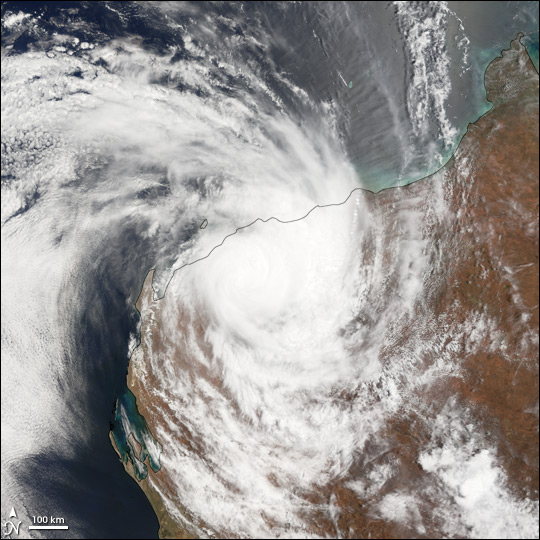 Residents of Western Australia’s Pilbara Coast are accustomed to tropical storms; the Pilbara Coast sees more cyclones than any other part of the Australian coastline. Still, Tropical Cyclone Clare strained some nerves in early January 2006. Although the storm was downgraded from a Category 3 to a Category 2, it prompted hundreds of residents to evacuate the area, and downed some power and telephone lines.

The Moderate Resolution Imaging Spectroradiometer (MODIS) on the Terra satellite took this image of Clare at 10:30 a.m. local time on January 10, 2006. Hurricanes in the Indian Ocean and the Western Pacific Ocean are termed cyclones, and their wind direction depends on whether they are north or south of the equator. In the Southern Hemisphere, cyclone winds blow in a clockwise direction. In this image, Clare stretches hundreds of kilometers across as it moves along the Pilbara Coast.

At the time this image was taken, Clare was a well-developed storm system with peak sustained winds of around 100 kilometers (60 miles) per hour. The cyclone’s center was about 300 kilometers from Port Hedland, the nearest major city. According to a report from ABC.net.au, the storm had winds as high as 200 kilometers per hour when it struck Dampier, a coastal town approximately 200 kilometers southwest of Port Hedland. The storm also dropped 20 centimeters (almost 8 inches) of rain on Dampier, and forecasters expected more rain for the area. Clare was expected to remain a Category 2 storm as it moved inland. As of the morning of January 10, 2006, however, only minor damage was reported.

Tropical Cyclone Clare formed on January 8, 2006, in the eastern Indian Ocean off the coast of Australia, and then came ashore on the Western Australia coast near Broome.