Fires in the Southern U.S.A. 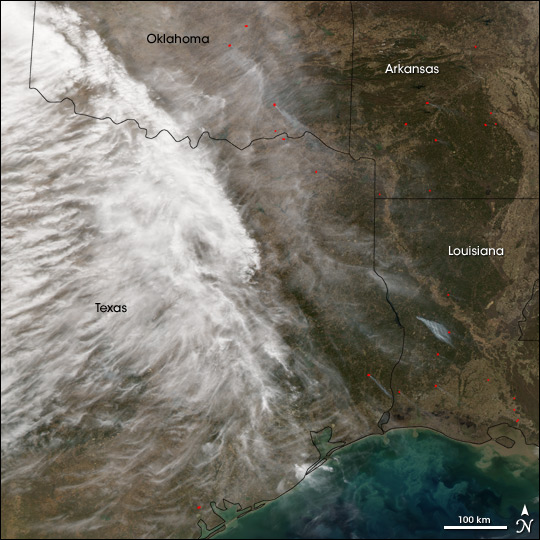 Drought, high temperatures, and strong winds combined with holiday fireworks, trash fires, and careless cigarettes to create a disaster in parts of Texas and Oklahoma in late December 2005. According to the Associated Press, more than 70 fires blazed throughout north and central Texas and Oklahoma, many of them set by people ignoring local fire bans. By December 29, nearly 20,000 acres had burned in the region, more than 100 homes had been lost, and several people had died from fire-related injuries.

This image shows parts of Texas, Oklahoma, Arkansas, and Louisiana, as imaged by the Moderate Resolution Imaging Spectroradiometer (MODIS) flying onboard the Aqua satellite. The sensor took this image on December 28, 2005, the same day that the fires caused the most damage. Cloud cover obscures part of the region, but hot spots, indicated in red, appear throughout the area, many of them sending up their own plumes of smoke.

North and central Texas, where most of the fires occurred, saw its fifth driest year on record in 2005. In the Dallas-Forth Worth area, annual rainfall was about 41 centimeters (16 inches) below normal. In Oklahoma, the annual rainfall was about 30 centimeters (12 inches) below normal. Shortly before the grass fires spread throughout the region, local temperatures topped 27 degrees Celsius (80 degrees Fahrenheit) and worsened the already-dry conditions. The wind and heat abated somewhat after the fires started, but the National Weather Service predicted a return of heat and wind right before New Year’s Day of 2006. Authorities expressed concern that a fresh round of holiday fireworks could touch off a fresh round of fires.

Fires in Texas and Oklahoma

A line of fires stretched across the plains west of Dallas-Forth Worth on April 9, 2009, and strong winds were driving smoke plumes from the fires toward the cities.

Fires in Texas and Oklahoma

A line of fires stretched across the plains west of Dallas-Forth Worth on April 9, 2009, and strong winds were driving smoke plumes from the fires toward the cities.