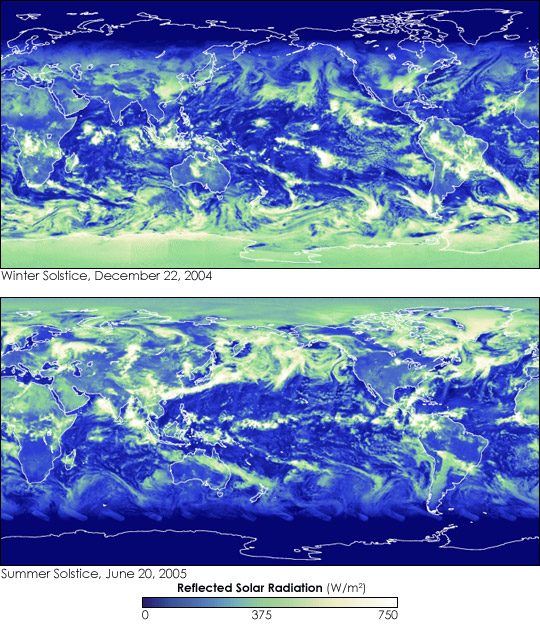 For the Northern Hemisphere, the Winter Solstice is the shortest day of the year. In the steady march of the year in the Arctic, the days gradually grow shorter between June and December until the far North plunges into the complete darkness of winter. The trend reverses at Winter Solstice, the point during the year when the Northern Hemisphere is the most inclined away from the Sun. After the solstice, which falls on December 21 or 22 every year, the days begin to lengthen. Probably because the day marks the beginning of the return of the Sun, many cultures celebrate a holiday near Winter Solstice, including Christmas, Hanukkah, and Kwanzaa.

On Winter Solstice, the polar North receives no energy from the Sun. In contrast, the amount of incoming solar energy the Earth receives on June 21, Summer Solstice, is 30 percent higher at the North Pole than at the Equator. The contrast between Winter and Summer Solstice is illustrated in these images. The images show the amount of sunlight that is reflected from the Earth as measured by the CERES instrument on NASA’s Terra satellite. In the top image, taken on Winter Solstice 2004, the far North is dark blue, indicating that no sunlight is being reflected back into space. The most sunlight is being reflected out of the Southern Hemisphere, where December 22 marked the longest day of the year. The lower image shows Summer Solstice 2005. Darkness dominates the South, while the North is now the location receiving and reflecting the most light. In both images, bright white clouds stand out because they are reflecting so much light back into space.

Notice how the polar North reflects less light during its summer (June) than the polar South reflects during its summer (December). The reason behind this is land cover. Antarctica in the south is nearly entirely covered with bright white snow, which reflects light well. The northern oceans are also capped with sea ice, but the area covered with sea ice during the summer has declined in recent years. Snow cover has also decreased on land. According to a study published in Science on October 28, 2005, snow in the Arctic melted on average two and a half days sooner per decade between 1961 and 2004. Open water and snow-free land both absorb more sunlight than reflective ice, and they warm the atmosphere as they release the absorbed heat. Heat in the Arctic increased by about 3 Watts per square meter per decade between 1961 and 2004, the same amount of heating that climate change models predict after several decades of greenhouse gas warming. The Arctic is now warmer than at any time in the past 400 years, and the warming trend is likely to continue. Warmer temperatures and thawing soil will allow shrubs and trees to move farther north, and they absorb even more energy than the tundra that currently covers the North.

Late Bloomers in the Arctic

Not everything in the far north appears ready to hibernate for the winter.

Image of the Day Water Snow and Ice Water Color

Arctic sea ice reaches its maximum extent in mid-March, around the time of the Vernal Equinox. After the Equinox, sunlight shines at the North Pole constantly until fall, and the sea ice will gradually decline.