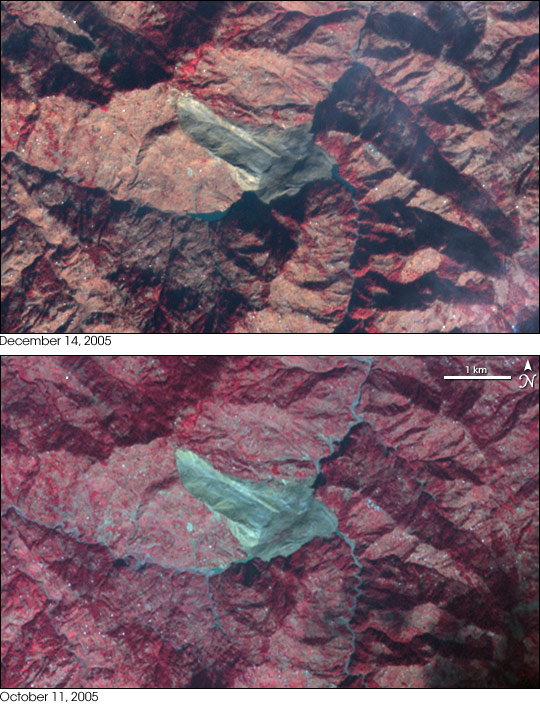 Two months after a magnitude 7.6 earthquake shook Kashmir, water continued to build behind a natural dam. The dam was created when a landslide covered two rivers, which are now pooling into lakes in the valleys beyond the slide. According to news reports, Pakistani authorities are monitoring the lakes for signs of breaches, but they do not think the lakes pose an immediate threat to the local population.

The Advanced Spaceborne Thermal Emission and Reflection Radiometer (ASTER) on NASA’s Terra satellite captured the top image of the new lakes on December 14, 2005. The lakes are the dark blue pools of water at the base of the tan slick of bare soil and rock that the landslide exposed. They have grown significantly since the lower image was taken on October 11, three days after the quake. In both images, plant-covered areas are red and bare earth is tan-silver. The difference in color between the two images is caused by differences in lighting conditions.

Landslide-generated lakes exist throughout the world. In the United States, Earthquake Lake was created on August 18, 1959, when an earthquake sent the wall of the Madison River Canyon over the Madison River about 27 miles northwest of West Yellowstone, Montana. Nearly 50 years later, the lake remains in place with a visitor’s center that teaches visitors about the earthquake and the region’s geology.

Two months after a magnitude 7.6 earthquake shook Kashmir, water continued to build behind a natural dam. The dam was created when a landslide covered two rivers, which are now pooling into lakes in the valleys beyond the slide.