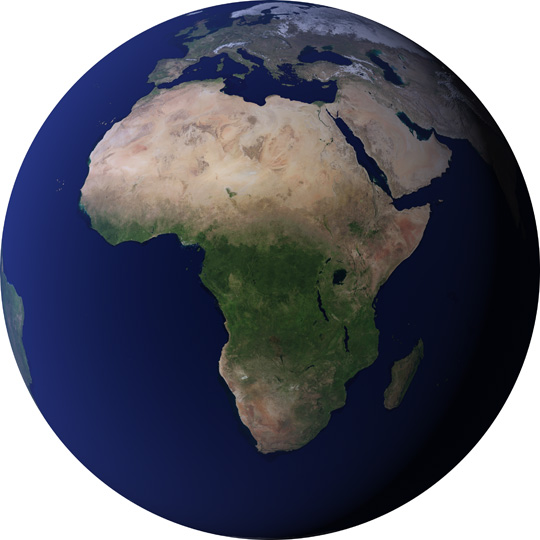 Everyone knows that NASA studies space; fewer people know that NASA also studies Earth. Since the agency’s creation almost 50 years ago, NASA has been a world leader in space-based studies of our home planet. Today, NASA operates 18 of the most advanced Earth-observing satellites ever built. In honor of the deployment of this Earth Observing System, NASA is pleased to share the next generation of its series of stunning “Blue Marble” Earth images.

This image of Africa from March 2005 is just one of many views of our planet provided in the new Blue Marble: Next Generation image collection. Using data from NASA’s Terra satellite, scientists and data visualizers combined a year’s worth of observations of the land surface and coastal oceans to produce the most detailed global images of Earth’s surface ever made.

In this image, the bright sands and dark, ancient lava flows of the Sahara Desert dominate the top of the scene, while tropical forests nestle greenly in the heart of the continent. A thin arc of deep blue lakes in the east-central part of the continent shows the location of western part of Africa’s Great Rift Valley, where geologic forces are stretching the continent apart. The largest lake is Lake Victoria, with Africa’s famous Serengeti to the southeast. In southern Africa, the Namib Desert lines the Atlantic Coast with deep-orange sand dunes.