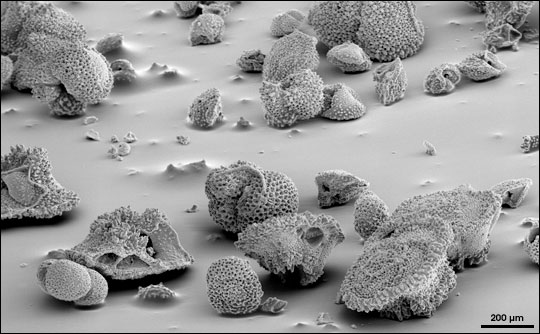 The temperature rises in the sun-warmed surface waters of the Atlantic Ocean in the Gulf of Mexico, and hurricanes explode into massive storms. A streak of warm water stretches across the Pacific, and Australia languishes in drought while the deserts along the west coast of South America are pounded with rain. Warm water flows north in the Atlantic Ocean’s Gulf Stream Current, and Europe enjoys a temperate climate. Earth’s oceans and its climate are intricately connected, each strongly influencing the other.

Scientists are learning about the connection between ocean temperatures and climate today with the help of satellite sensors, such as the Advanced Microwave Scanning Radiometer-EOS (AMSR/E), which orbits 705 kilometers above the Earth on NASA’s Aqua satellite. But this record only extends as far back as satellites have been in orbit. To understand the connection between ocean temperatures and long-term climate change, scientists need a record of ocean temperatures that extends back to Earth’s last big climate swing—its emergence from the last Ice Age. How would you measure the temperature of the ocean during the last Ice Age?

Scientists who want to study past climates can't get data from above, they have to look in the depths of the ocean. After they die, plants and animals sink to the ocean floor in a steady rain of debris that settles in successive layers. Since different species thrive in different climates, scientists can gauge the temperature of the ocean by looking at fossils in a vertical column of the ocean floor. The most plentiful, and perhaps the most useful, are the fossilized skeletons of microscopic plants and animals—foraminifera—shown above. Not only do the species of foraminifera at a particular location provide an approximate temperature range, but the very chemistry of the scales that coat them changes based on temperature. The microfossils can also be dated, giving scientists a clue as to the age of the layer of sediment in which the fossils were found. Scientists have been studying sediment from the ocean floor for decades in an attempt to understand past climate change. To learn more, see Paleoclimatology: A Record from the Deep and Ocean and Climate on the Earth Observatory.