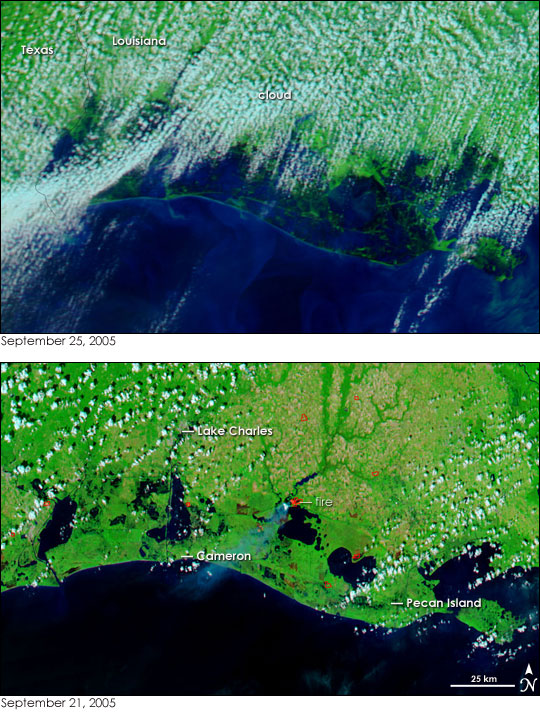 Hurricane Rita pummeled the Louisiana and Texas shoreline when it came ashore on September 24, 2005. Though the Category 3 storm spared major cities, it left much of the southwestern and central Louisiana shoreline under water. The Moderate Resolution Imaging Spectroradiometer (MODIS) on NASA’s Aqua captured the top image of the floods on September 25, 2005. The trailing edge of Rita’s clouds, light blue and white in this false-color image, still cover the region. The shoreline resembles a line of barrier islands fringing a large bay more than the solid coast that existed four days earlier, lower image.

Many of the communities most severely affected by the storm are shown in these images, including hard-hit Lake Charles and Cameron, Louisiana. Lake Charles isn’t clearly visible under the clouds, but traces of dark blue beneath the clouds hint at flooding in the region. Cameron and other coastal communities like Pecan Island and Grand Chenier (located on the shore just east of the plume of smoke seen in the lower image) appear to be almost entirely under water.

Offshore, sediment swirls in the waters of the Gulf of Mexico, coloring the water blue in contrast to its normal inky black. The sediment is probably a combination of sludge stirred up from the ocean floor when Rita’s winds and rains churned Gulf waters and run-off from the extensive flooding seen in this image.

Much of the southwestern and central Louisiana shoreline was under water after Hurricane Rita passed on September 24, 2005.