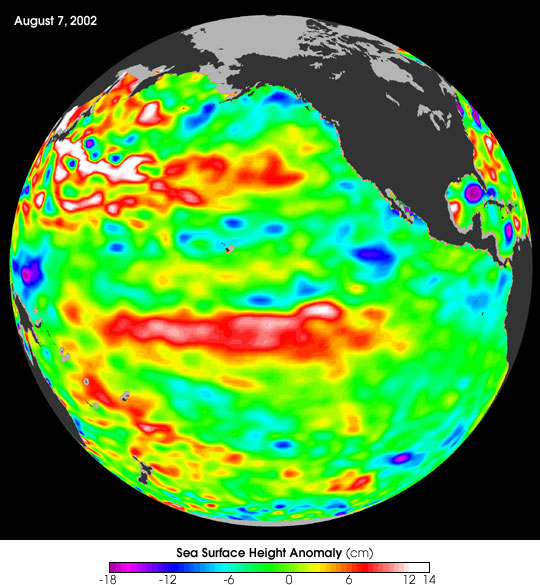 This Topex/Poseidon image of sea-surface heights was taken during a 10-day collection cycle ending August 7, 2002. Sea-surface heights are a measure of how much heat is stored in the ocean depths to influence future planetary climate events. Since May 2001, there have been a series of warm Kelvin waves—eastward-moving ocean waves that cross the equatorial Pacific in about two months. A sizable one arrived at the South American coast last February, raising the ocean temperature by 2 degrees Celsius (3.6 degrees Fahrenheit) and triggering the National Oceanic and Atmospheric Administration’s forecast for a mild El Niño in 2002. There was another wave in June, followed by the current large pool of warm water in the tropical Pacific that is now moving toward the coast of South America at a speed of 215 kilometers (134 miles) a day and will arrive there in three to four weeks, raising ocean temperatures. Scientists will continue to monitor the Pacific closely for further signs of El Niño formation and intensity.

Over its ten-year lifespan, TOPEX/Poseidon has acquired continuous data on sea surface height, wind speed, and wave height have given us a new understanding of how ocean circulation affects climate. The satellite provides input for long-term climate forecasting and prediction models. Topex/Poseidon produced the first global views of seasonal current changes. It maps year-to-year changes in upper-ocean heat storage. The satellite has improved our understanding of tides, producing the world’s most precise global tidal maps and demystifying deep-ocean tides and their effect on ocean circulation. It monitors global mean sea-level changes, an effective indicator of the consequence of global temperature change. Its data are input into atmospheric models for forecasting hurricane seasons and individual storm severity. And the satellite has improved our knowledge of Earth’s gravity field.

To learn more, read: After a Decade, NASA’s Topex/Poseidon Adventure Sails On.