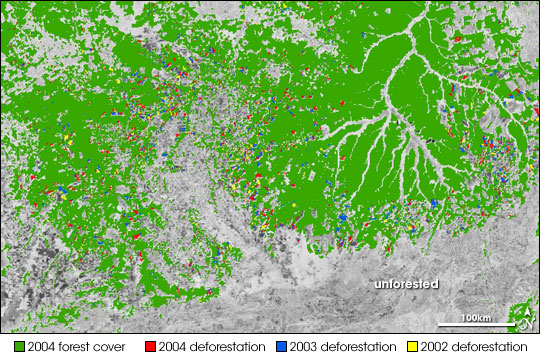 For decades, the Brazilian government has been basing estimates of Amazon deforestation on high-resolution Landsat satellite data. Having satellite data that show plenty of detail of the surface is critical for mapping the total deforested area because some of the deforestation in the region comes from small-scale clearing or logging projects. The high level of detail has some drawbacks. Image file sizes are large and they require large amounts of computer resources to process and store. In addition, the higher the level of detail a satellite sensor provides the less total area it can observe at one time, which makes mapping large areas time-consuming.

A group of scientists recently checked to see how well a moderate resolution sensor known as the Moderate Resolution Imaging Spectroradiometer (MODIS), which flies on NASA’s Terra and Aqua satellites, could detect deforestation in the Amazon. This image reveals the results of their analysis. Areas still forested in 2004 are green. Deforested areas that MODIS detected between 2002 and 2004 are labeled in different colors: 2004 deforestation is red, 2003 is blue, and 2002 is yellow. The image is centered just to the west of the Xingu River watershed, which dominates the upper right of the scene. Areas that appear in gray scale are either not part of the Amazon forest ecosystem, or else were deforested before the time period covered by the analysis.

Although MODIS has a maximum spatial resolution of 250 meters per pixel (compared to Landsat's 15 meters per pixel), the scientists found that the sensors could still detect a significant portion of the region’s deforestation. Once a clearing was the size of three MODIS pixels, change-detection computer programs consistently identified the areas as deforested. The results were confirmed by field studies in the state of Mato Grosso in which areas that MODIS flagged as deforested were verified by scientists on the ground. The scientists discovered that the number of large forest clearings (areas greater than 10 MODIS pixels) doubled in Mato Grosso during the period from August 2003-August 2004 as compared to August 2001-Augsut 2002: from 750 large clearings to 1500.

The MODIS sensors view the Amazon multiple times a day (at least one daytime pass per satellite), so the sensors can provide a rapid assessment of forest change that isn't possible with high-resolution sensors. Although high-resolution assessments will still be necessary to estimate total deforested area and to map small clearings, MODIS deforestation assessments can make a valuable contribution to ecosystem studies in the Amazon rainforest. The most valuable contribution could be the reduced computer "overhead" required for processing and storing the smaller image files.

Fires and Deforestation in the Amazon