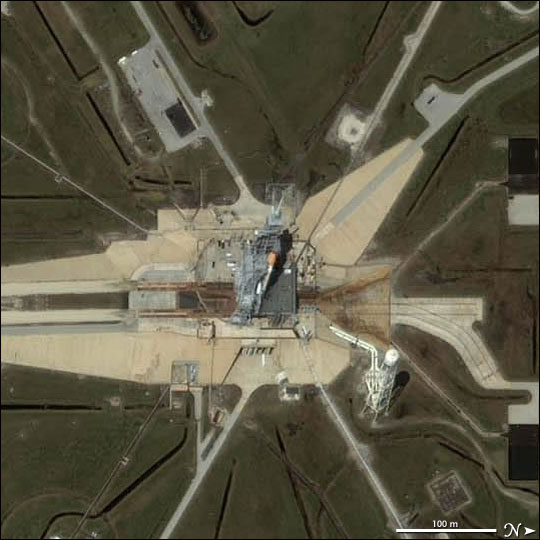 Although they were keeping a cautious eye on Hurricane Dennis as it moved through the Caribbean, NASA flight operations officials decided to leave the Space Shuttle Discovery on its launch pad at Kennedy Space Center at Cape Canaveral, Florida, on July 8, 2005, in anticipation of the scheduled launch—July 13, weather permitting. Cape Canaveral is roughly in the middle of Florida’s eastern coastline, just over 75 kilometers (about 50 miles) east of Orlando, and the forecasted path for Dennis as of July 8 called for the storm to swing wide of eastern Florida and head toward the Gulf of Mexico.

This image from the Ikonos satellite shows Discovery on launch pad 39B on April 8, 2005. The tip of the bright orange external fuel tank is clearly visible, with the white, solid rocket booster snug up next to it. The orbiter itself is “in front of” (to the left in the image) the booster and fuel tank, but it is almost completely hidden by the support scaffolding, which swings away from the spacecraft before the final countdown to launch. Only the tip of the shuttle’s right wing is visible; it sticks out as a slim white triangle between the gray scaffolding and the rocket booster. (The ground-based photo provided in the link above shows the shuttle with the support structure in an open position.)

The shuttle was on the launch pad on April 7, but engineers decided to roll Discovery back to the Vehicle Assembly Building in order to replace the external fuel tank. The shuttle returned to its familiar spot on launch pad 39B on June 15, and has been undergoing its final checkups. Launch is scheduled for 3:51 p.m. Eastern Daylight Time on Wednesday, July 13.