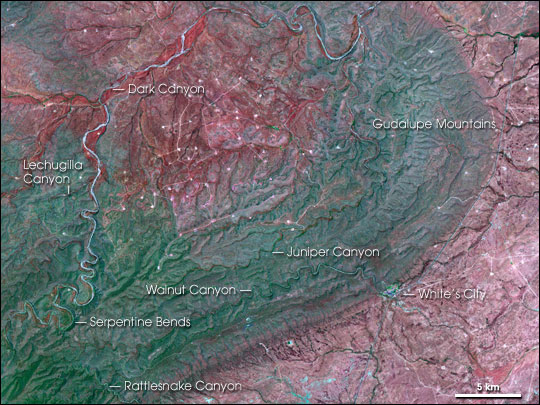 In southeastern New Mexico, an ancient and unusual coral reef rises thousands of feet above the surrounding desert terrain. The fossilized reef is etched with caves, and it is hundreds of millions of years old. It formed in the Permian Era, when all the continents were fused into a landmass that stretched from pole to pole. Over time, geologic forces beneath the Earth's surface pushed portions of this 400-mile-long, horseshoe-shaped reef high into the air. Today, the reef is known as the Guadalupe Mountains.

This Landsat image from May 27, 2000, shows the Carlsbad Cavern National Park region of the Guadalupe Mountains. The park entrance is just to the west of White's City; the park stretches west-southwest from there. The forested slopes of the Guadalupe Mountains make a green arc across the image. In the valleys and basins below the mountains, bare and thinly vegetated landscapes appear in shades of red. In a place where water is scarce, rivers and streams may only flow when it rains. The canyons with their ominous names are more permanent: Dark, Rattlesnake, and Slaughter (south of Rattlesnake Canyon in the large image). South of the Dark Canyon, the bare terrain is etched with short roads that end in white dots. Many of these dots mark the location of oil or natural gas wells.

The Carlsbad Caverns are a World Heritage Site, designated as such for the outstanding preservation of fossils of Permian Era ocean life. The caves themselves are unusual as well. Unlike most limestone caves, these were not carved by the weak carbonic acid that naturally exists in surface water. Instead, the limestone was dissolved by sulfuric acid. The reef that became the Guadalupe Mountains once sat at the edge of a large inland sea. The same types of processes that buried the reef also helped create oil deposits. Hydrogen sulfide gas given off by the oil deposits reacted with the ground water to form sulfuric acid, which dissolved the limestone and created the caves.