Dust Sweeps over the Red Sea 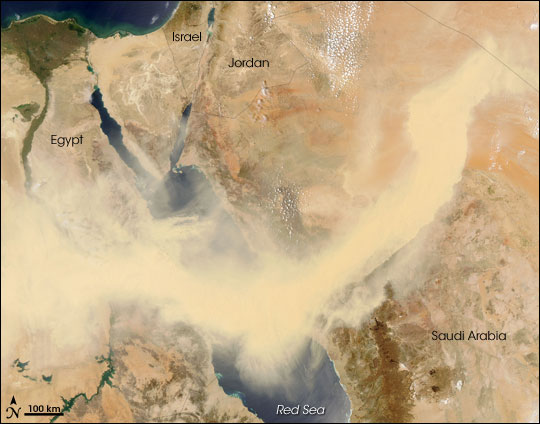 A thick band of dust was snaking across the Red Sea between Egypt and Saudi Arabia on May 13, 2005. Beneath the dust, the arid, rugged landscape appears in muted shades of green, brown, and pinkish-orange. The light tan dust plume is hundreds of kilometers across and so thick that it completely hides the surface in places. Although it is difficult to tell from this single image where the dust cloud originated and which way it is moving, additional satellite data collected over several hours by the METEOSAT satellite reveal that the event began to the northeast of the area shown here, in the vicinity of Jordan. Over the course of the day, the cloud advanced southward and expanded into the arc pictured here.

In these desert landscapes, the Nile is a ribbon of vegetation-lined water flowing northward into a fan-shaped delta before emptying into the Mediterranean Sea (top left). The silvery etchings of dried streambeds decorate the Sinai Peninsula, which juts southward into the Red Sea like an arrowhead. Turquoise-colored coral reefs glimmer on the seafloor on the west coast of the sea (near bottom center). This image of the region was captured by the Moderate Resolution Imaging Spectroradiometer (MODIS) on NASA’s Aqua satellite on May 13. 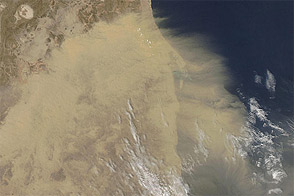 Acquired September 8, 2011, this natural-color image shows dust blowing off the coast of Sudan and over the Red Sea.