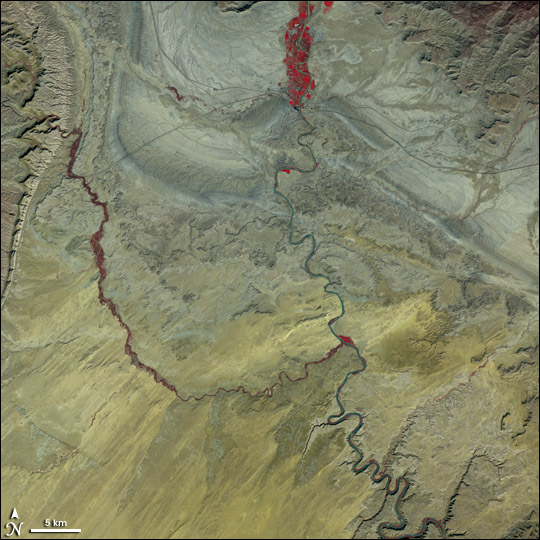 In the spring of 2005, a team of paleontologists, led by James Kirkland of the Utah Geological Survey, announced the find of a new kind of dinosaur in the Cedar Mountain Formation. Dating from the early Cretaceous geological period, this dinosaur was caught in the act of trading in a meaty diet for one of leafy greens. Falcarius utahensis sports teeth adapted to shredding leaves, and a pelvis wide enough to accommodate a long, plant-digesting gut. Its legs, however, retain long thigh bones, optimal for chasing fast prey.

This Terra ASTER image, collected on September 26, 2000, shows the general region where the fossil was collected, near Green River, Utah. In this false-color image, data have been combined from near-infrared, red, and green wavelengths (ASTER bands 3, 2, & 1). In this combination, vegetation appears red. The scarcity of red in this image indicates the aridity of the region. What little vegetation lives here mostly clings to riverbanks. A clear exception is the bright red patch in the north. This profuse vegetation lives near the city of Green River.

According to the Utah Geological Survey, the Cedar Mountain Formation was long known for its lack of any dinosaur fossils, let alone rare ones. So the location of this fossil surprised paleontologists as much as its transitional characteristics. Falcarius utahensis is a type of therizinosauroid dinosaur. Until now, fossils from this slightly built, long-clawed family of dinosaurs have been found almost exclusively in China.

The Cedar Mountain Formation is one of the few rock formations in North America from the early Cretaceous, and once paleontologists realized it held dinosaur fossils, it began providing them with rich pickings. Kirkland has found three other dinosaurs in this formation in the past 11 years: armored dinosaur Gastonia, meat-eating Nedcolbertia (named after paleontologist Edwin H. Colbert), and carnivorous Utahraptor (a kind of super-sized velociraptor similar to what appeared in Jurassic Park). A team of professional and volunteer paleontologists from the Denver Museum of Nature and Science also discovered a new sauropod in the late 1990s: Cedarosaurus.